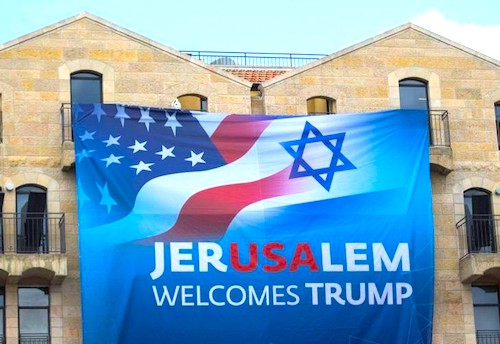 President Donald Trump reportedly told a crowd full of Republican donors at a fundraiser event in Palm Beach on Friday night that “the Democrats hate Jewish people” and that he’s popular enough to be Prime Minister of Israel:

After freshman Congresswoman Ilhan Omar’s comments that pro-Israel activists were pressuring her to show “allegiance” to Israel, the president told Republican National Committee donors that “he didn’t understand how any Jew could vote for a Democrat these days,” according to the Axios news site.

Quoting three people who attended the address to a room full of funders at his Mar-a-Lago resort in Palm Beach, Florida, the report said that Trump also boasted about his popularity in Israel, based off his decision to move the US embassy from Tel Aviv to Jerusalem.

If he could run for prime minister of Israel, Trump said, he would be polling at 98 percent, the three confidential sources told Axios.

“President Trump is entitled to his own opinion but not his own facts. In this case, both are just WRONG,” the Jewish Democratic Council of America posted on Facebook. “In the midterm elections 82% of the two-party Jewish vote went to Democrats. 32/34 Jewish members of Congress are Democrats. As of early October, 70% Jewish voters disapproved of Trump’s handling of the rise of anti-Semitism in our country. Those are FACTS.”

The data they cited came from a survey conducted by the Mellman Group, a polling firm hired by Democrats.

Trump’s broadside came after Democrats spend days deliberating over how to respond to Omar’s comments that critics said amounted to accusing Jewish Americans of having “dual loyalty” to the United States and Israel. On Thursday, the House overwhelmingly passed a resolution that denounced various forms of bigotry, including anti-Semitism and Islamophobia, which Republicans and some Democrats lambasted as not addressing Jew-hatred directly. The measure, which passed by a vote of 407 to 23, also made no mention of Omar, who voted for it.

The president’s remarks Friday night ramped up attacks he had leveled on Twitter days earlier. “The Democrats have become an anti-Israel, party, they’ve become an anti-Jewish party,” he tweeted.

Trump himself has himself previously been accused anti-Semitism – and of embracing his anti-Semitic supporters and welcoming them into the American mainstream.

During the 2016 presidential campaign, he tweeted a picture of his rival Hillary Clinton with a Jewish star of David with the text: “The most corrupt candidate ever.” In the final days of the race, he released a campaign ad that talked about a “global power structure” that was hurting average Americans. The narration was accompanied by images of George Soros, Lloyd Blankfein, and Janet Yellen, all of whom are Jewish.

Contrary to what the liberal Jews who hate Trump claim, he’s been the most popular U.S. President ever among Jews overall probably since their hero FDR.  And among zionist Jews, his popularity is unparalleled, which is why he can confidently claim that he’s popular enough in Israel to win a general election for prime minister of Israel.   Did Trump perhaps provide some “antisemitic” dog whistles in his campaign?  Sure, but not because he believes it, but rather because he’s a political whore.

And despite all his critics who claim he’s “antisemitic”, no Jew can seriously believe that smear.  He has both children and grandchildren who are jewish, and it would make absolutely no sense whatsoever that he would be antisemitic.  But Jews themselves traditionally will complain about everything, even the things they like.

In the movie “Annie Hall” Woody Allen once said, “There’s an old joke. Two elderly women are at a Catskill mountain resort and one of them says, ‘Boy, the food at this place is really terrible.’ And the other one says, ‘Yeah, I know, and such small portions.”  That sums up the jewish attitude toward Trump and the world in general.