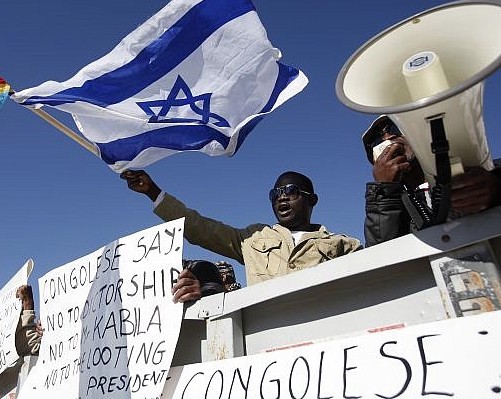 Interior Minister Aryeh Deri has delayed the planned deportation of hundreds of asylum seekers from the Democratic Republic of Congo (DRC) in Israel after the Foreign Ministry said they may be in danger if they are returned to their home country:

In a letter to Shlomo Mor-Yosef, the director-general of the Population Immigration and Border Authority, Deri wrote the move came “in light of recent updates from professional sources at the Foreign Ministry, and based on their professional recommendation to delay my decision concerning ending the collective protection of nationals from the Democratic Republic of Congo because of recent developments there.”

…The letter was signed on February 21, but was revealed Thursday in response to an appeal against Deri’s original decision filed by rights groups HIAS Israel, the Hotline for Refugees and Migrants, the Association for Civil Rights in Israel, ASSAF, Physicians for Human Rights and the African Refugee Development Center.

“We are happy the Interior Ministry canceled the deportation decision,” the Hotline for Refugees and Migrants said in a statement, calling Deri’s original plan “wrong and irresponsible.”

“The ministry’s announcement clarifies that the decision to remove the group protection from Congolese citizens while the political and security situation in the country is far from stable, was hasty and dangerous.”

It added that many of the asylum requests by Congolese nationals haven’t been considered for over a decade.

There are an estimated hundreds of Congolese citizens residing in Israel, who fled Congo following an outbreak of violence in the country in the early 2000s.

The Interior Ministry’s Population Immigration and Border Authority (PIBA) determined in October that they are no longer in need of temporary protection after the Foreign Ministry found there was no “impediment to the expatriation” of Congolese citizens.

According to the original decision, Congolese citizens would have until January 5 to leave Israel, according to PIBA, and no new residency permits extending beyond that date would be issued.

Along with asylum seekers from Sudan, South Sudan and Eritrea, citizens of Congo are the only ones eligible to receive temporary protection status in Israel. Critics have accused Israel of dragging its feet in making asylum determinations for the migrants.

…Antagonism in Israel toward migrants has hardened in recent years with an estimated 35,000 African immigrants in the country facing hostility from lawmakers and residents in communities with high migrant populations.

The High Court of Justice has pushed back against government plans to jail or deport the migrants, saying a solution in line with international norms must be found.

The Africans, mainly from war-torn Sudan and dictatorial Eritrea, began arriving in Israel in 2005 through its porous border with Egypt, after Egyptian forces violently quashed a refugee demonstration in Cairo and word spread of safety and job opportunities in Israel. Tens of thousands crossed the desert border, often after enduring dangerous journeys, before Israel completed a barrier in 2012 that stopped the influx.

While many migrants say they are refugees fleeing conflict or persecution, Israel views them as job-seekers who threaten the Jewish character of the state.

Why would the Israelis want 35,000 non-jewish Africans in their country?  What possible benefit would they be to Israel?  Israel has survived 70 years without being flooded with unskilled Black Africans, so what could possibly motivate them to let them stay?  In short, if they allow them to stay, the Jews can virtue signal and claim that Israel isn’t just another racist, exclusive, xenophobic nation.  It would allow Israel to score some international public relations points and deflect criticism over Gaza.

But the Jews know full well that 35,000 Africans could turn into 100,000 in 20 years, and that means a permanent Black under class in Israel, which will put pressure on Israel in the future to redefine its identity as a “jewish State”.  If Jews don’t want to be given a hard time for being an exclusive jewish ethno-State, they are going to have to concede that Whites should be afforded the same desire if they wish.  But that’s not likely to happen because Jews fear largely hegemonic White nations far more than they fear 35,000 Africans in their own country.