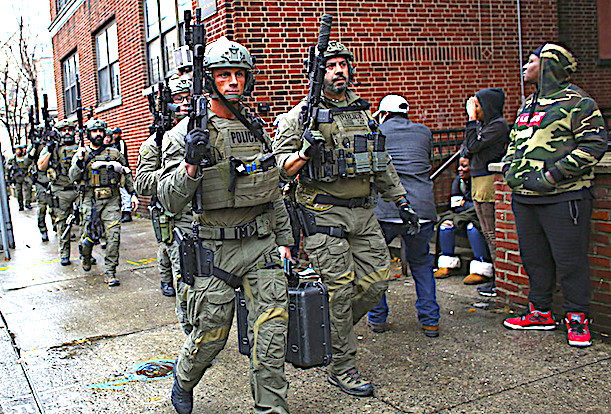 The police haven’t yet even released the identities of the shooters involved in a gun battle in Jersey City that left six dead, including the suspects themselves, yet the jewish mayor, Steven Fulop, has already claimed the incident was a ‘hate crime’ that ‘targeted’ the jewish community:

“Last night after extensive review of our (closed-circuit television system) it has now become clear from the cameras that these two individuals targeted the Kosher grocery location on (Martin Luther King Drive – the 2 JCPD officers that were on a foot post one block away immediately responded/engaged and prevented the perpetrators from leaving that location and harming any further civilians,” the mayor wrote in the first of five tweets he sent early Wednesday.

Despite calls from people who replied to his Wednesday tweets and another on Tuesday night, the 42-year-old mayor didn’t explain further what he meant by “targeted.”

Fulop released a similar tweet Tuesday night in which he said “based on our initial investigation (which is ongoing) we now believe the active shooters targeted the location they attacked,” he wrote.

Fulop added that there were no further credible threats and said Jersey City police will be increasing their presence. He also pointed out that the identity of the shooters will be released by the state Attorney General’s Office, which is investigating along with the Hudson County Prosecutor’s Office.

The mayor went on to say that, “hate and anti-Semitism have never had a place here in (Jersey City) and will never have a place in our city.”

Judging from the video available of this shoot out, the kosher market is smack dab in the middle of a Black ghetto in Jersey City thus making it probably that the shooters were Black.

How two Blacks with weapons described only as “long guns” could hold off a huge SWAT team for over 2 hours is remarkable.

The incident allegedly started when a police officer was shot and killed in a nearby cemetery during an attempted arrest involving suspects in a prior murder investigation.

After the shooting, the suspects fled in an alleged stolen van which just so happened to have an alleged “incendiary device” in it, and drove directly to the kosher market where they took and shot jewish hostages while engaging police in a hot standoff with gunfire for over the next 2 hours.

This stinks of some sort of psy-op, perhaps a follow-up event to revive the synagogue shooting in Pittsburgh last year.

Is this event going to be hyped to justify new draconian zero-tolerance ‘antisemitism’ laws in America, much like the ones recently enacted in Germany?

Right on cue, the mayor of New York City is declaring that ‘violent antisemitism’ has become a ‘national crisis’.

A Wikipedia page has already been created describing the incident, so it should be very revealing how it gets edited over the course of the “investigation”.

Yet another jewish activist group called “Americans Against Antisemitism” went to Jersey City in the aftermath of the shooting to catch Blacks on the street expressing “horrifying” antisemitism. If you listen to what the Blacks are saying, it’s really simple: since the Jews moved in, they’ve made the neighborhood worse for the Blacks, and the Blacks resent them.  If you resent Jews for their behavior, you are an antisemite: