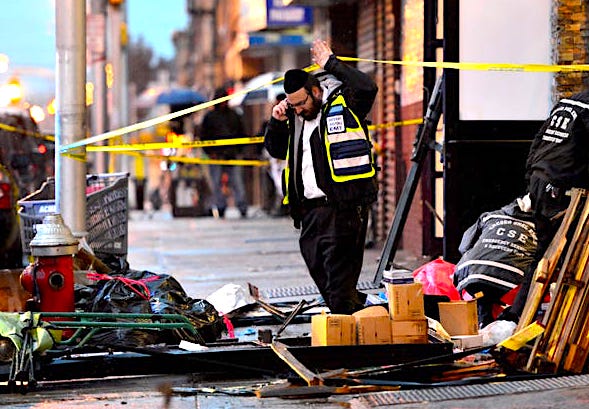 Now we know why the Jewish mayor of Jersey City immediately proclaimed that the recent mass shooting at a kosher market  was an ‘antisemitic hate crime‘ even before the police had a chance to investigate it — the mayor already knew there was an ongoing turf war between the local Blacks and the wealthier Hasidic Jews who are trying to forcefully push them out:

Jersey City Mayor Steve Fulop is calling on a school board member to resign after she called the Jewish community in the Greenville neighborhood “brutes” who have “threatened, intimidated and harassed” black homeowners.

Joan Terrell-Paige made the comments in a Facebook post responding to an online story about Jersey City fighting hate in the wake of the mass shooting last week. Two members of the city’s growing Hasidic community, as well as a store employee and a Jersey City police detective were killed by an armed man and woman in what authorities are calling a hate crime.

“She should resign,” Fulop said in a tweet. “That type of language has no place in our schools and no place amongst elected officials. Imagine she said this about any other community — what would the reaction be? The same standard should apply here.”

Terrell-Paige, whose term ends Dec. 31, 2020, ended her commentary by saying she was speaking “as a private citizen, not as an elected member of the Board of Education.” The Facebook post has since been deleted.

…In 2017, Jersey City passed a “no-knock” law, partly in response to complaints by some homeowners in the Greenville section and other areas of the city that they were being harassed by people wanting to purchase their homes.

[What follows is the full text of the ‘controversial’ since-deleted Facebook post by Joan Terrell-Paige, outlining her allegations in detail (punctuation and emphasis added, ed.)]:

Where was all this “faith and hope” when Black homeowners were threatened, intimidated, and harassed by “I WANT TO BUY YOUR HOUSE” brutes of the jewish community? They brazenly came on the property of Ward F Black homeowners and waved bags of money.  Resistance was met with more threats of WE WILL BRING DRUG DEALERS AND PROSTITUTES TO LIVE NEXT DOOR TO YOU. YOU WILL SELL TO US THEN.

Where was this “faith and hope”? Who helped Black people living in rental properties owned by the jewish people but were given 30 day eviction notices so that more jewish people could move in?

The $1M MAKE IT YOURS ads that mysteriously appeared in New York City encouraging jewish people to come to Jersey City did not fight hate.

Solomon Dwek did not spread “faith and hope”. He caused many reputations to be ruined. However we learned 6 rabbis were accused of selling body parts. Where is the truth in these reports? If we are going to tell a narrative it should begin with TRUTH not more cover up of the truth. Dialogue is important but the truth it critical.

Drugs and guns are planted in the Black community.  Mr. Anderson and Ms. Graham went directly to the kosher supermarket. I believe they knew they would come out in body bags. What is the message they were sending? Are we brave enough to explore the answer to their message? Are we brave enough to stop the assault on the Black communities of America? My people deserve respect and to live in peace in this city.

(I am speaking as a private citizen not as an elected member of the Jersey City Board of Education — these beliefs are mine and mine alone).

Again, here we have the old Russian proverb validated once again, “The Jew always tells you what happened to him, but he never tells you why.”

The Jewish-controlled press wants us to believe that two irrational and violent ‘Black Hebrew’ nationalists who hated Jews for no reason whatsoever decided to go into a kosher market and just kill a bunch of Jews.

In reality, Anderson and Graham were standing up for their Black neighbors who are in the process of being pushed out of the communities they’ve lived in for generations by rapacious and aggressive Jews who won’t take no for an answer.

Of course, the violence solved nothing and merely played right into the hands of the Jews who can again portray themselves as the perennial victims rather than the true victimizers — which they clearly are in Jersey City, according to the evidence provided by Terrell-Paige.

This violence has been brewing in Jersey City for years, but Jews have cleverly relied on Whites to naturally take their side in this conflict by focusing on the irrational, violent behavior of Blacks, which Jews themselves have been fomenting through their anti-White propaganda for decades.

Unlike the communist agitator Rosa Parks, Joan Terrell-Paige appears to be a true hero of the Black community and should be applauded for exposing the brutal strong-arm tactics of the Jews, knowing full well that she would be mercilessly attacked for doing so. 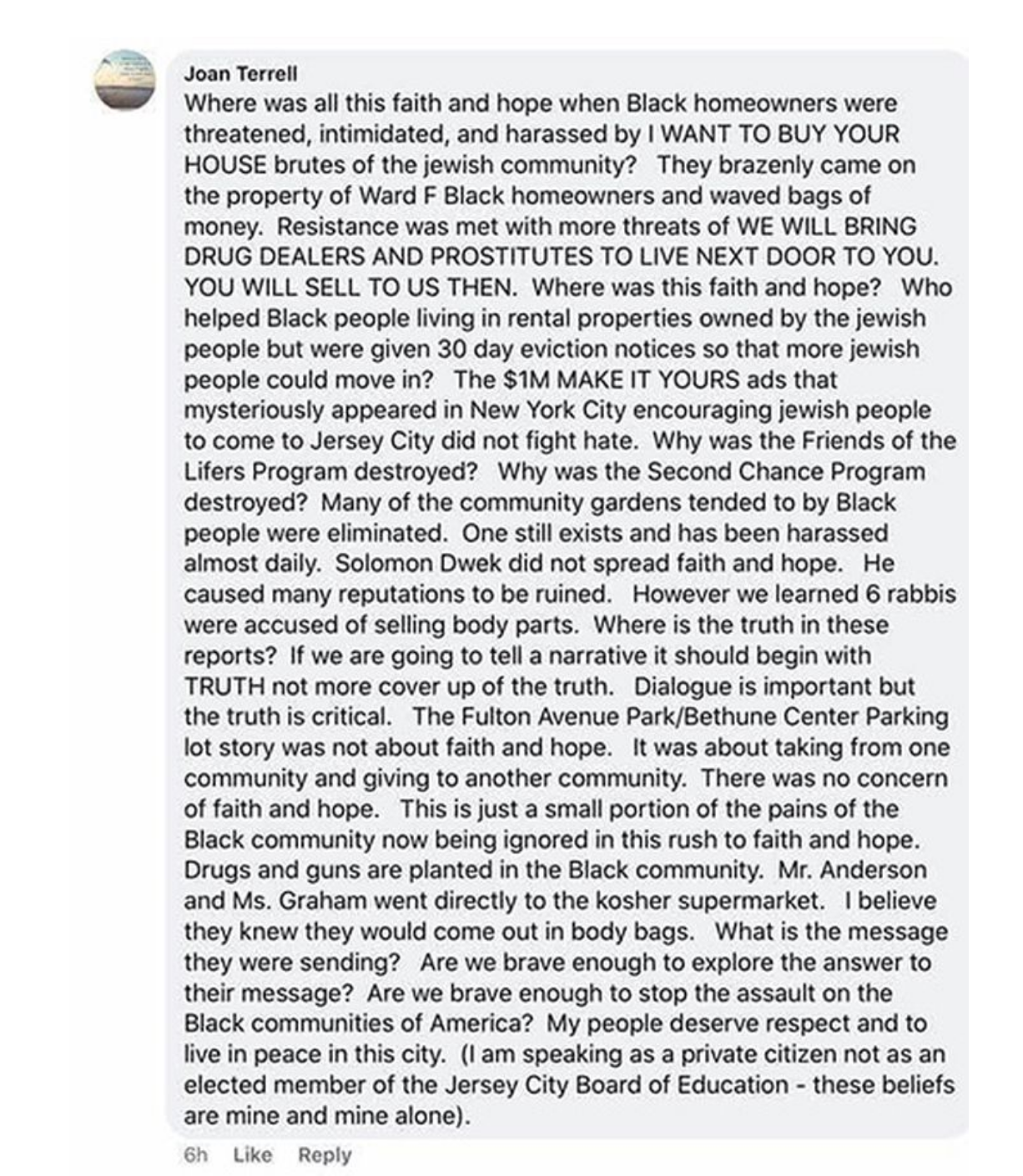