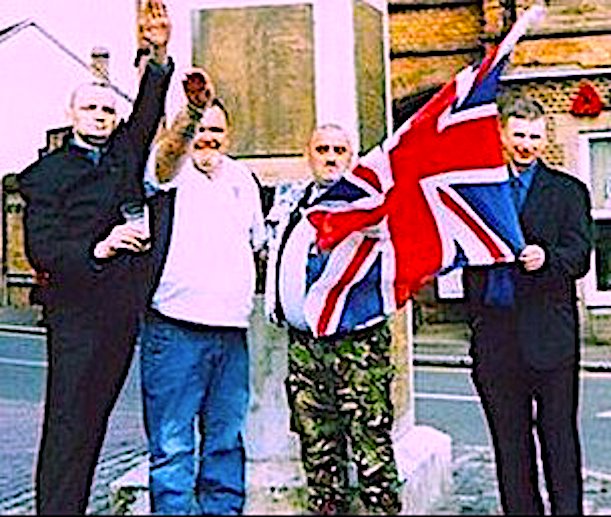 An annual report on extremism in the UK has warned that the destruction of the far-right group National Action last year has ushered in a new unit inspired by “the world’s most extreme Satanic-Nazi group”:

Hope Not Hate, whose State of Hate report was published this week, warned that the Sonnenkrieg Division was “the most worrying of them all,” after three young male members were arrested in December.

Last year saw the trial and imprisonment of 12 National Action members, including Wayne Bell, described as “a violent psychopath with a particular penchant for threatening Jews,” who he said were “destructive” and “vile”. He was sentenced to four years and three months in May.

The Sonnenkrieg (Sun War) Division describes itself as the UK offshoot of the Atomwaffen (Atomic Weapons) Division, an antisemitic American terrorist organisation whose members have been found guilty of five counts of murder.

A BBC ‘investigation’ late last year revealed that the Sonnenkrieg Division has a “fixation with rape and sexual violence… members of the group had shared videos of one female supporter being tortured and scored with a knife by one of the group’s male members”.

Hope Not Hate said the resurgence of the far-right in part flowed from funding from the United States and warned that a strong showing for far-right parties in European elections this spring would “give a boost to the far-right in the UK”.

The far-right is an umbrella term describing those whose political outlook is seen in cultural terms, including race, identity and immigration, and whose beliefs centre on nationalism and the exceptionalism of a race or country.

“The far right is successfully tapping into the political rage and discontent that is prevalent in society,” the organisation said. “A narrative of betrayal and traitors increasingly dominates the far right’s discourse, with much of their anger focused on MPs – and female MPs in particular.”

It said the far-right’s rising popularity was being fed by a “sense that the political system is broken, that there is a democratic deficit, and that elites and the establishment do not speak for ordinary people”.

Far-right activists have been emboldened by the election of populist far-right leaders around the world, including Brazil’s new president Jair Bolsonaro, who has said he would “rather [his son] die in a car accident than turn up dating some guy”.

Far from being an outlier, Hope Not Hate said Britain had big problems. Online, five of the ten most followed far-right activists in the world are based here, the report noting a “continued rising trend in traffic to far-right websites” by Brits, despite the efforts of social media companies to slow the phenomenon.

The jewish watchdog group, Hope Not Hate, apparently has stolen a page out of Alex Jones’s playbook.  For years, Alex Jones has been telling his loyal followers that the world is controlled by a “Nazi death cult” and that Arabs control Hollywood.

But certainly, not since WWII, has England been so threatened by “satanic” Nazis.  Apparently, not all “Nazis” are “satanic”; but the “satanic” ones are the most ‘worrisome’.

After all, “Christian Nazis” don’t sound nearly as menacing, and many of the real National Socialists in World War II identified as Christian.

And it’s interesting to note that whenever the government neutralizes a threatening group of “extremists” such as the National Action, within weeks another, even more threatening group, takes its place.

Just like when Al Qaeda was ‘defeated’ only to be replaced by the ‘super evil’ ISIS.

The more they warn the world about a ‘Nazi’ takeover, the more ‘antisemitic’ the world allegedly becomes.  Apparently, there’s nothing that makes a Jew feel more jewish than “satanic” Nazis hiding in your hedgerows.