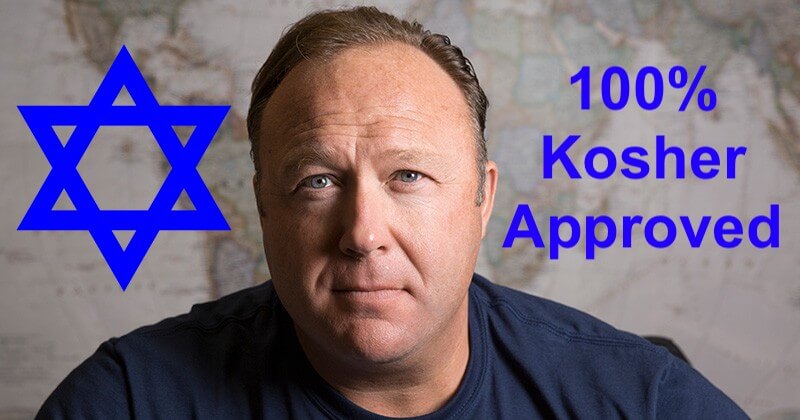 Alex Jones has been all over the media lately – both the mainstream and so-called “alternative” outlets – because he was de-platformed by Facebook, YouTube, Apple, and Spotify. While there is lots of noise surrounding these events, most “news” outlets are missing the point. Alex Jones is 100% controlled – exactly like the mainstream media he rails against every day.

To illustrate the agenda at work, we will first turn our attention to The Jerusalem Post to see how they are trying to frame Jones as an “antisemite”:

Facebook announced on Monday that it had removed four pages belonging to US conspiracy theorist Alex Jones for “repeatedly posting content over the past several days” that breaks its community standards.

Jones has been dubbed “the most paranoid man in America [who] is trying to overthrow the ‘global Stasi Borg state,’ one conspiracy theory at a time,” by Rolling Stone magazine.

Facebook said it removed his pages, including Infowars, “for glorifying violence, which violates our graphic violence policy, and using dehumanizing language to describe people who are transgender, Muslims and immigrants, which violates our hate speech policies.”

The conspiracy theorist has, in the past, also engaged in several anti-Jewish theories, claiming last year that Jews posed as KKK followers in Charlottesville in order to discredit white supremacist protesters.

“I mean, quite frankly, I’ve been to these events, a lot of the KKK guys with their hats off look like they’re from the cast of “Seinfeld,” Jones said at the time.

Earlier the same year, Jones made headlines for saying that “the Jewish mafia” was supporting efforts by moderate Republicans to “derail the Trump presidency.”

Despite several such theories, Jones consistently denies that he is antisemitic and continues to claim that he is a staunch supporter of Israel.

“I’ve never been to Israel but let me tell you, it’s really historical and neat,” he said in one of his YouTube videos. “I think I’m gonna plan a trip there soon, a two week trip.”

The self-proclaimed activist founds his support for Israel in his strong Islamophobic sentiments, calling the countries surrounding the Jewish state “nomadic groups which have come into the area as part of some jihad.”

In addition, after Trump won the election, American political journalism company Politico reported that he called Jones, saying “Listen, Alex, I just talked to kings and queens of the world, world leaders, you name it, but he said it doesn’t matter, I wanted to talk to you, to thank your audience, and I’ll be on the next few weeks to thank them.”

Alex Jones, who was married to a jewish woman and has two jewish children, has spent the last twenty years defending and running interference for the Jews, even going so far as stating with a straight face that the “Chinese” and “Saudis” run Hollywood (see the video below).

Many of the companies that sponsor the Alex Jones and his “Infowars” outlet are jewish-owned. He routinely attacks anyone who calls into his shows pointing out the undue influence of jewish power in the world’s problems.

One of Alex’s Jones’ favorite tactics is to bombard his listeners with various “news” stories and keep them chasing mysterious groups, without ever revealing the real source of the world’s problems. He will regularly go on tirades about the mysterious “Elite” or “Bilderbergers” or perhaps the “free masons” – but he will never discuss jewish power:

So how is it that all of a sudden jew-friendly Alex Jones is being de-platformed and portrayed as “anti-jewish” and “antisemitic”?

It would seem that Alex Jones is undergoing a CIA-Mossad process called “sheep dipping,” where he is publicly given credibility as “anti-jewish” so that anyone – especially a Trump supporter – who is interested in learning about the “Jewish Question” will go to “truth teller” Alex Jones who’s not afraid to “expose” the jewish hand in world affairs.

Of course, Alex Jones will do no such thing.

If Trump supporters listen to Alex Jones, he will do the exact opposite and steer them away from ever really understanding the true nature and extent of the jewish agenda. Instead, they will be told that crypto-Nazis posing as Jews run everything – and that this secret “German death cult” is trying to make the Jews look bad and take the blame for their evil deeds.

That’s the game that is being played with Alex Jones.

Is it becoming clear?

Alex Jones and the rest of the so-called “alternative” media are 100% kosher approved.