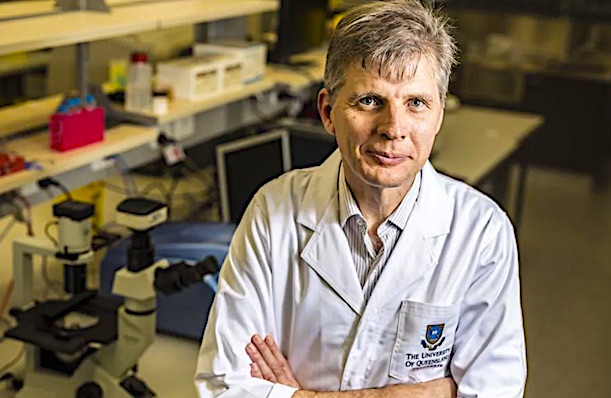 The mainstream media, which is focused on promoting the development of experimental vaccines to stop the spread of coronavirus, is virtually silent about a team of Australian researchers who say they’ve found a cure for the novel coronavirus and hope to have patients enrolled in a nationwide trial by the end of the month:

He said one of the medications, given to some of the first people to test positive for COVID-19 in Australia, had already resulted in “disappearance of the virus” and complete recovery from the infection.

Prof Paterson, who is also an infectious disease physician at the Royal Brisbane and Women’s Hospital, said it wasn’t a stretch to label the drugs “a treatment or a cure”.

“Patients would end up with no viable coronavirus in their system at all after the end of therapy.”

The drugs are both already registered and available in Australia.

“What we want to do at the moment is a large clinical trial across Australia, looking at 50 hospitals, and what we’re going to compare is one drug, versus another drug, versus the combination of the two drugs,” Prof Paterson said.

Given their history, researchers have a “long experience of them being very well tolerated” and there are no unexpected side effects.

“We’re not on a flat foot, we can sort of move ahead very rapidly with enrolling Australians in this trial,” Prof Paterson said.

“It’s the question we all have – we know it’s coming now, what is the best way to treat it?”

Prof Paterson said positive experiences in the fight against coronavirus have already been recorded overseas, citing China and Singapore. His research team are confident they can start getting the drugs to patients in a very safe way on home soil.

“We want to give Australians the absolute best treatment rather than just someone’s guesses or someone’s anecdotal experiences from a few people,” Prof Paterson told news.com.au.

He said they hope to be enrolling patients by the end of March.

“And that way, if we can test it in this first wave of patients, we do fully expect that there are going to be ongoing infections for months and months ahead, and therefore we’ll have the best possible information to treat subsequent patients,” Prof Paterson said….

One of the two medications is a HIV drug, which has been superseded by “newer generation” HIV drugs, and the other is an anti-malaria drug called chloroquine which is rarely used and “kept on the shelf now” due to resistance to malaria.

He said the researchers want to study them in a “very meaningful way” against the coronavirus to “try and alleviate that anxiety of Australians”.

“There have already been patients treated with these in Australia and there’s been successful outcomes but it hasn’t been done in a controlled or a comparative way,” Prof Paterson said.

The drugs would be given orally, as tablets.

Prof Paterson said patients would be asked to participate “as soon as they’re admitted” to hospital with the aim of beginning treatment “very early on in their illness”.

He said the research was sparked by Chinese patients, who were first given the drug in Australia, showing their doctors information on the internet about the treatment used overseas.

“Our doctors were very, very surprised that a HIV drug could actually work against the novel coronavirus and there was a bit of skepticism,” he said.

“That first wave of Chinese patients we had (in Australia), they all did very, very well when they were treated with the HIV drug.

“That’s reassuring … that we’re onto something really good here.”

Well, this discovery is throwing a monkey wrench into the works.  These researchers in Australia didn’t get the memo that the whole point of the coronavirus ‘pandemic’ is to ultimately justify forced mass vaccination on the public.

How will they justify forced vaccination if they already have a cure using cheap drugs that have been sitting around for years?

Just by ‘pure luck’ Israeli researchers just so happened to be working on a coronavirus vaccine which, they claim, could be ready for distribution in the next 90 days.

Wouldn’t you rather be forced to submit to an untested and potentially dangerous or even lethal experimental vaccine rather than voluntarily take a known safe and effective anti-viral drug with no known serious side effects?

Don’t be surprised if we see a story come out that refutes these initial findings in Australia, claiming that their ‘optimistic’ early results were ‘premature’ and ‘misleading’.

After all, without ‘legal’ forced vaccinations, how will the nation-wreckers cull the herd, especially the ‘intelligensia’ who are daring to warn the public of the coming boot heel on the back our collective neck.

Bill Gates explained the real purpose of vaccinations in a public Ted Talk: