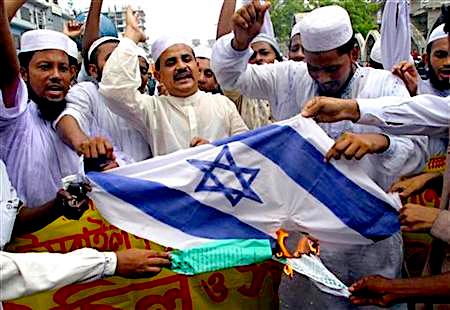 After inundating Germany with Muslims from the Middle East who have an understandable antipathy toward Jews, the Chancellor of Germany, Angela Merkel, is now lecturing all Germans on the “evils” of antisemitism:

German Chancellor Angela Merkel underscored the urgency of combating antisemitism, racism and hatred more than 70 years after the Holocaust, calling for new ways to keep alive the memory of the millions of people killed by the Nazis.

Merkel, in a video address released ahead of Sunday’s International Holocaust Remembrance Day, said it was everyone’s responsibility to ensure “zero tolerance” of xenophobia and all forms of antisemitism.

“People growing up today must know what people were capable of in the past, and we must work proactively to ensure that it is never repeated,” Merkel said.

Millions of people were robbed of their rights, tortured and murdered — including an estimated six million Jews — across Europe from 1933 to 1945, when the Nazis ruled Germany.

The German leader called for new forms of remembrance due to the dwindling number of eyewitnesses from the Nazi era, and because of persistent hatred and incitement today.

Merkel expressed deep regret about antisemitism among Germans, as well as hatred of Jews among Muslim migrants and a hatred of Israel that she said could not be tolerated.

Germany last year appointed a commissioner to oversee efforts to combat antisemitism and will also set up a central repository to collect information about such incidents and attacks, with an eye to bolstering prevention, Merkel said.

“It will be crucial in the coming time to find new ways of remembrance,” she said. “We must look more closely at the personalities of people who were victims back then, and to tell their stories.”

This is the game being played on the ethnic German population, and the White European population in general.  The Jews aid and abet the flooding of White Christendom with Jew-hating Muslims, and then denounce the White Europeans for the rise in antisemitism in their countries.  But as the old Russian proverb tells us, “The Jew will always tell you what happened to him, but he’ll never tell you why.”  Many Muslims hate Jews because of the Israeli genocide committed against the Palestinians, and for fomenting war, using the U.S. as a proxy army, in the arab world in general.

And of course, the Jews always point out any time a Jew is criticized anywhere in the world, but they’ll never tell you if the criticism is ever warranted or factually-based.  The Jews would like us to believe that all forms of antisemitism are irrational and have nothing to do with jewish behavior.  The goyim just hate Jews for no reason other than them being Jews.  No other ethnicity can make that astonishing claim, but never under-estimate the chutzpah of the Jews.