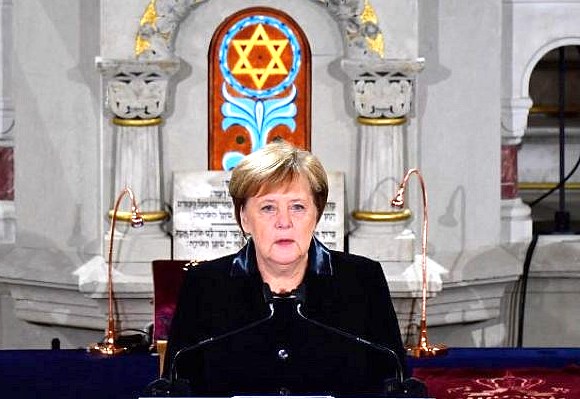 As Angela Merkel’s tenure as Chancellor of Germany is coming to an end, Jews are celebrating her jewish legacy and commitment to Israel and the jewish agenda, which included mass immigration:

Germany’s chancellor has “developed a very personal connection to the State of Israel and the Jewish people, [becoming] one of the rare German politicians who – when speaking about lessons learned from the past – really knows what she is talking about, and really means it,” said Beck, whose book, “Chancellor Merkel, Israel and the Jews,” was published in Hebrew last year by Yedioth Books. “Not like so many other German politicians who repeat slogans they have learned to say.”

Yet it can be argued that Merkel the politician may have become a victim of her own humanitarian convictions – opening doors to more than a million people and showing the world a kinder, gentler Germany…

Her announcement that she would step down from the chairmanship of the Christian Democratic Union — a role that generally guarantees the role of chancellor to the winning party — follows the erosion of the CDU’s conservative voter base due to mounting frustration over Merkel’s handling of the migrant/refugee crisis.

In 2015, saying “We can manage it,” she opened German borders – ultimately more than a million people came. Not all of them were legitimate refugees.

Her decision has triggered fear and anger among many Germans and, some say, contributed to the rise of the far-right Alternative for Germany — the first such party since 1945 to take seats in the national parliament.

Merkel now has to pay the political price. Her final phase as chancellor could last as long as a couple of years, until the next national election. Far from being a lame duck, she will still determine the tone and direction of her country…

Merkel “has stood up for Israel and the Jewish people with heart and soul, not just as a politician but as a person,” Knobloch, 86, head of the Jewish Community of Munich and Upper Bavaria, told JTA in a telephone interview.

In 2008, when she was head of the Central Council of Jews in Germany, Knobloch accompanied Merkel to Israel, where the chancellor became the first foreign head of government to address the Knesset.

“It was unforgettable, her fantastic statement about Germany’s responsibility for Israel,” Knobloch recalled. “She called it part of Germany’s ‘raison d’etat,” or national interest…

What makes Merkel’s engagement with Israel and Judaism so “spectacular is that she is actually coming from [East] Germany … which was very hostile to Israel and never really took interest in Jews and what happened to them during the Holocaust,” Beck said…

“She often told me that she heard almost nothing during her childhood about the persecution and murder of the Jews, and this is why she was determined to stand up for the Jews,” said Knobloch, who survived the Holocaust in hiding in Germany.

Beck and others put Merkel’s motivations in accepting refugees in that context. The author said Merkel “felt that in light of the human tragedy in Syria and Iraq, Germany cannot sit and do nothing.”

Merkel also hesitated to impose “selections” at the border, “due to the historical sense of the word with regard to the Holocaust,” Beck said. “So Germany became actually a victim of its incapacity to distinguish between past and present.”

There you have it — Merkel made Germany’s reason for existing to serve jewish interests because she allegedly felt so guilty as a German for what Germany allegedly did to the Jews in WWII, and those interests included flooding Germany with millions of violent and antisemitic Muslim and African migrants because to say “no” to any of them would have brought back memories of the so-called “Holocaust”.

This is a perfect example of how Jews admit that they use the so-called Holocaust as a political weapon to undermine and ultimately destroy traditionally Christian nations, and they are proud of it.

Merkel’s role was to make Germany subservient to Israel and international jewish interests, and she played that role so well that they will probably erect a statue of her in Tel Aviv in the next few years.

In putting the Jews first, Merkel has created more hatred and social unrest than Europe has seen since before WWII, and her legacy will be one of shame in the eyes in the ethnic Germans whom she sacrificed simply because she knew her political power was directly related to how much she was willing to pander to the Jews who propped her up and ensured her continuation in office.