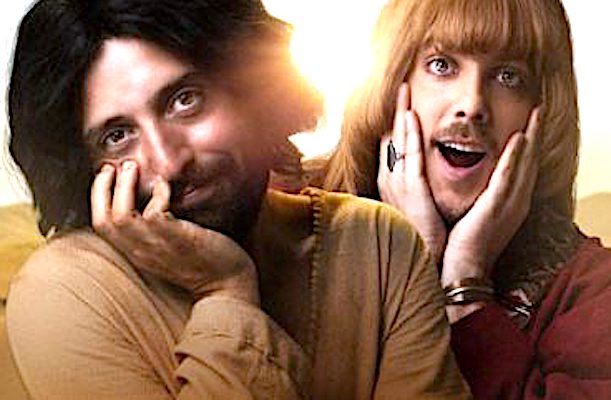 Netflix has released a “Christmas special” movie that depicts Jesus as a homosexual and the Virgin Mary as an adulterer, prompting more than one million people to sign a petition to have the film removed from the popular streaming service:

A Primeira Tentação de Cristo, or The First Temptation of Christ, is a production of the Porta dos Fundos ‘comedy’ troupe from Brazil. In the supposed parody, Jesus is shown bringing home a homosexual lover to meet Mary and Joseph.

On social media, Netflix proclaimed: “Jesus, who’s hitting the big 3-0, brings a surprise guest to meet the family. A Christmas special so wrong, it must be from comedians Porta dos Fundos.” Translated, Porta dos Fundos means “back door.”

More than one million people have signed a petition at Change.org demanding that the “gravely offensive” video be removed from the online streaming service. Politicians and public figures have denounced the video and Porta dos Fundos. Famed Brazilian actor and director Carlos Vereza, for example, wrote on Facebook that the troupe of satirists is “pitiful” for creating “trash-porn movies.”

Also on social media, evangelical Christian pastor and politician Marco Feliciano deplored that courts have ruled against banning Porta dos Fundos productions for the sake of “freedom of expression.” The outspoken Feliciano is seeking “joint action by the churches and good people to stop” the group.

An organization that brings together dozens of evangelical Christian communities in Brazil, Coalizão pelo Evangelho, or the Coalition of the Gospel, has also denounced the video. On the organization’s website, Pastor Joel Theodoro of Bairro Imperial Presbyterian Church in Rio de Janeiro wrote that he has canceled his Netflix subscription because the video constitutes a “humiliation to the Lord.”

At the same, website Pastor Thiago Guerra of Trinity Church in Sao Paulo wrote that Brazil’s Penal Code calls for fines or imprisonment for those who publicly mock anyone on the basis of religious belief or publicly vilify an act or object of religious worship.

Netflix told O Estado de S. Paulo newspaper that it “values and approves the creative freedom of the artists it works with, and also recognizes that not everyone will enjoy this content. Hence the freedom of choice offered by the company in its varied menu of options, which include, for example, Biblical stories.“

What’s more offensive: that Christ is depicted as a sodomite or as a mixed race Brazilian with a perma-tan?

The reaction to this controversy provides a perfect illustration why Christianity was never meant for non-Israelites, like the vast majority of Brazilians who clearly perceive Christ as if He were some kind of “object of religious worship” like a statue of the Virgin Mary.

But all that aside, would Netflix air a “comedy” about a group of rabbis who kidnap and murder Christian children as part of a jewish holiday celebration?  How about a comedy about Jews celebrating Purim at Auschwitz?  Need we ask?

Of course, when it comes to trashing Christianity, it’s always protected “free speech”, and if you don’t want to watch it, you can just “change the channel”.

“Freedom of choice” is the noble guise under which Jews peddle their filth and degeneracy.