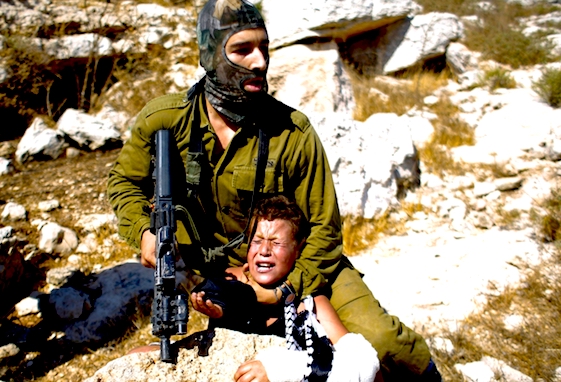 (Times Of Israel)  A new survey conducted and financed by Jewish supremacist groups reveals that most of the antisemitic “incidents” claimed by young European Jews are directly the result of the Israeli mistreatment of the Palestinians:

The research also suggests that young Jews in Europe are particularly likely to believe that they are accused or blamed by people in their countries for the actions of the Israeli government because they are Jewish. Eighty-five percent of the 16-34 year-olds surveyed said this happens to them at least occasionally; nearly one-quarter said it occurs “all the time.”

Researchers speculate that the results may reflect the growing problem of anti-Semitism on European campuses. More than half of the young people who participated in the survey were students.

Michael O’Flaherty, director of the European Union’s Agency for Fundamental Rights (FRA), which published the report alongside the European Commission and the London-based Institute for Jewish Policy Research (JPR), called the results “deeply troubling.”

The extent of anti-Semitic violence and vandalism — again more likely to be experienced by young people — were also uncovered by the research.

Nearly one in every 25 young Jewish Europeans said they had been the victim of an anti-Semitic physical attack in the past year. This constituted a “noticeably higher proportion than either of the older age bands,” the report suggests. A similar pattern was found with regard to anti-Semitic vandalism.

Eighty percent of the young Jews who had experienced anti-Semitic harassment — and 51% of victims of anti-Semitic violence — did not report it to the authorities.

According to the old Russian proverb, the Jew always tells you what happened to him, but never tells you WHY.  Here we have Jews telling us that a huge percentage of them were on the receiving end of comments that “offended” them, but what is obviously going on here is that young Jews are “shocked” to find that their non-jewish peers sympathize with the Palestinians who are being ethnically cleansed by the Israelis.  And when these young, idealistic Europeans dare to criticize the Israelis and express support for the Palestinians, Jews are “offended” and claim that they are the real victims of “antisemitism”.

Last year, we reported how Jews in Sweden noticed the connection between the slaughter in Gaza and “antisemitism” in Sweden.

This hypocrisy is completely intolerable to everyone but the Jews themselves because hypocrisy is second nature to them, as even Jesus Christ pointed out.  And you can bet your bottom shekel that if Jews actually felt “threatened” by these alleged antisemitic “incidents”, they would absolutely report them to the police, who will drop whatever murder case they are working on and investigate their claims of antisemitic text messages and Tweets.  The fact is, they don’t report them to the “authorities” because even the police know that it’s not a crime, yet, to win an argument with a Jew over the brutality of the Israeli army.