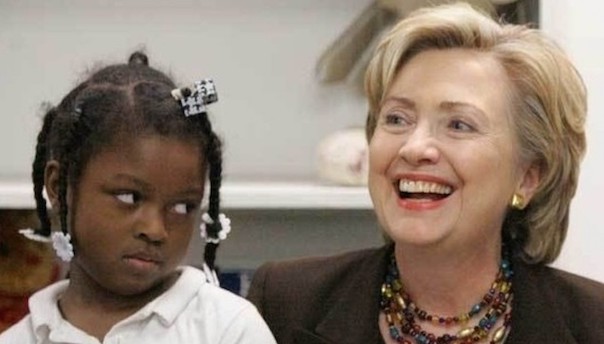 A new study by Cydney Dupree, an affirmative action Black assistant professor at Yale, published in the Journal of Personality and Social Psychology, found that White liberals tended to downplay their verbal competence when interacting with Blacks like herself:

While many previous studies have examined how people who hold racial bias behave in multi-racial settings, few have studied how whites who are more well-intentioned interact with people of other races. “There’s less work that explores how well-intentioned whites try to get along with racial minorities,” Dupree says. “We wanted to know their strategies for increasing connections between members of different social groups—and how effective these strategies are.”

Dupree and her co-author, Susan Fiske of Princeton University, began by analyzing the words used in campaign speeches delivered by Democratic and Republican presidential candidates to different audiences over the years. They scanned 74 speeches delivered by white candidates over a 25-year period. Approximately half were addressed to mostly-minority audiences—at a Hispanic small business roundtable discussion or a black church, for example. They then paired each speech delivered to a mostly-minority audience with a comparable speech delivered at a mostly-white audience—at a mostly-white church or university, for example. The researchers analyzed the text of these speeches for two measures: words related to competence (that is, words about ability or status, such as “assertive” or “competitive”) and words related to warmth (that is, words about friendliness, such as “supportive” and “compassionate”).

Warmth, related to intentions towards others, and competence, related to the ability to carry out those intentions, are two fundamental dimensions of how we see others and portray ourselves in social interactions. Stereotypical portrayals of black Americans generally show them as being less competent than their white counterparts, but not necessarily less friendly or warm, Dupree explains.

Dupree and Fiske suspect that the behavior stems from a liberal person’s desire to connect with other races. One possible reason for the “competence downshift,” as the authors describe it, is that, regardless of race, people tend to downplay their competence when they want to appear likeable and friendly. But it’s also possible that “this is happening because people are using common stereotypes in an effort to get along,” Dupree says.

No surprise here — these findings are consistent with a Dartmouth University study from about ten years ago that found that after interacting with Blacks, Whites performed more poorly on cognitive tests.  Literally, just being in the presence of Blacks had a negative effect on Whites’ abilities to think clearly.  This would explain why our multicultural society aspires to lower goals, and why our educational system has dumbed itself down so that it doesn’t become blatantly obvious just how incompetent Blacks are compared to Whites.

In reality, many Blacks despise White liberals because they know how they try to ingratiate themselves to them, but at the same time they hate White conservatives who won’t give them the time of day.  Like Jews, Blacks will never be pleased by what White liberals try to do for them, because once they see that you’re willing to concede a little, they will merely demand more until you have nothing left to give except your life, and in the end, they will often take that.