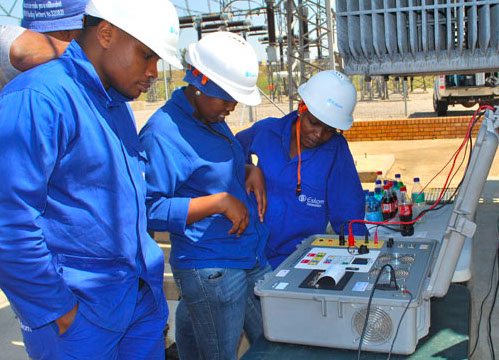 This is according to a Rapport article which states that the company wants to reduce its qualified white workforce by 1,308 over the next year.

The skilled white employees which are targeted include engineers, tradespeople, academically qualified staff, and middle management.

These plans come as the company is under pressure from the Department of Labour to reduce the number of white employees to reflect the country’s demographics.

In March 2015, Eskom shared its plans to decrease the number of skilled white employees by 3,389 to meet its affirmative action targets.

These white staff cuts were needed to comply with South Africa’s strict provisions of the Equity Act.

According to the reports the Department of Labour was insistent that Eskom must make changes to ensure its employee demographics reflect South Africa’s “national and regional demography”.

In November 2014 trade union Solidarity said that it warned Eskom for years about the grave consequences of its serious skills shortage.

However, these warnings fell on deaf ears.

The National Union of Metalworkers of SA (Numsa) agreed with Solidarity, saying that the manner in which Eskom applied affirmative action was hurting service delivery.

“Let’s be honest, a lot of the people who work at Eskom do not have the skills required of them,” a Numsa spokesperson said at the time.

The latest plans to cut experienced white staff at Eskom come at a time when the company is trying to attract the exact talent it is getting rid of.

Public Enterprises Minister Pravin Gordhan recently admitted that good people have been forced out of the company because of a toxic and uncertain environment.

He explained that they are now trying to track down and recruit former Eskom staff who are working in countries like the Philippines and Indonesia.

Gordhan said the loss of senior skills at Eskom is not a small matter, especially when it comes to engineering staff.

It is therefore surprising that Eskom is now looking to cut even more of these staff members – based purely on race.

Solidarity head Dirk Hermann has urged Gordhan to suspend its affirmative action plan at Eskom for five years to ensure that critical skills are retained at the embattled company.

The union has also launched a project to recruit experienced and skilled engineers and technicians to help alleviate the crisis at Eskom.

By the time Eskom reaches its diversity hiring goals, there will be no company left, no electricity to provide, and no infrastructure to maintain.  By insisting on affirmative action hiring, right out of the communist playbook, Blacks are ensuring that no Blacks in the future will have any jobs.

Without a majority of skilled Whites to maintain the company, there will be no company worth saving.  What is happening to Eskom is a microcosm of what is happening to all of South Africa as Blacks aggressively take what they do not deserve, and the jewish-controlled media applauds this “redistribution” as “progress”.

But let’s not pretend we can rationally discuss this dilemma with the Blacks — they don’t care if Eskom goes bankrupt and the lights go out across South Africa.  If South Africa is going to go dark, at least it will be dark for everyone, just as their puppet masters have planned all along.  There will be no inequality if everyone is equally poor, equally ignorant, equally hopeless.  If Blacks truly wanted good jobs, the last thing they would do is chase their skilled White business operators away.

It’s a bitter pill for Blacks to swallow: they need Whites, but Whites don’t need them.