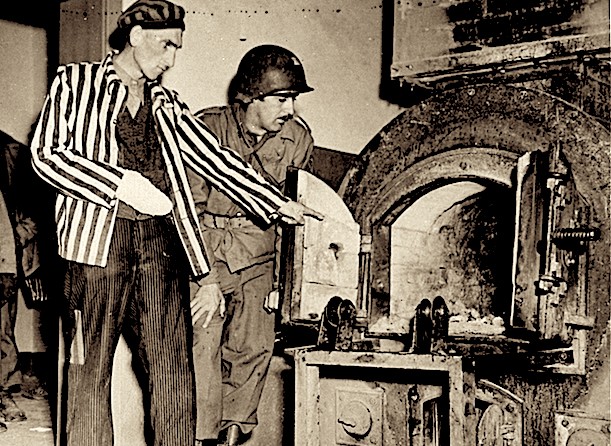 For the 75th anniversary of the beginning of the Nuremberg so-called “war crime” trials, a new Jewish film on the subject is featuring Benjamin Ferencz, the last living prosecutor  — who apparently has similar tall tales of his own, just as outlandish and improbable as the Jewish survivor “witnesses” they paraded before the court:

It seems grimly appropriate that the last surviving prosecutor of the Nuremberg Trials — the moment Nazi evil met some form of comeuppance — is a Jew.

And yet the age of 100, Benjamin Ferencz does not display the rage of a man who witnessed the horror of the death camps — but instead reveals his satisfaction that he was able to help bring some of the Shoah’s perpetrators to justice.

Despite being Jewish, it was “not difficult” at all to hear the evidence given in the trial, he says, because he had “comprehensive documentary proof of the incredible slaughter of about one million Jewish men, women, and children — which I also witnessed as a member of the liberating forces at several concentration camps”.

The trials (there were 12 in all) opened on November 20 1945, and have become a byword for the application of fair and balanced judgment to war crimes, and also for new categories of crime — crimes against humanity, crimes of aggression and the crime of genocide.

In a new film by award-winning filmmaker Jenny Ash, the Nuremberg trials and their legacy are examined, showing spine-chilling original footage of the court proceedings in the first trial of 21 leading Nazis, including Herman Göring, Hans Frank and Julius Streicher.

And Ben Ferencz — who was a prosecutor in a later Nuremberg trial, that of the Einsatzgruppen officers — is on hand in the film to report some of the dreadful sights he saw while collating evidence.

Speaking to the JC from his home in Miami, Ben Ferencz makes it clear that the memories of the Nuremberg trials are still as sharp today as when he was visiting the abandoned concentration camps in the late spring and summer of 1945, after the war ended.

In the film, he says: “Until then, we didn’t even know the term ‘concentration camp’, we had no idea”. But, over horrific scenes of the slaughter in the camps, Mr Ferencz says: “The impact of my first visit was indescribable. There were bodies piled up like cordwood”.

Mr Ferencz told the JC: “Of course the trial could have been done differently. There were many possible ways of dealing with the criminals. The Russians, for example, would have shot them all without trial. It was the Americans who insisted upon giving them as fair a trial as was possible, and we succeeded in doing that.”

…Mr Ferencz who, throughout his long career backed the establishment of the International Criminal Court, is in no doubt about the fairness of the Nuremberg proceedings. He told the JC: “Of course it’s possible to conduct a fairly fair trial even if the crimes are given a new name which more accurately describes mass murder”.

In an interview he gave to the Washington Post in 2005, Mr Ferencz talked about some of the rough and ready methods in use at the time. He recalled: “Someone who was not there could never really grasp how unreal the situation was … I once saw DPs (displaced persons) beat an SS man and then strap him to the steel gurney of a crematorium. They slid him in the oven, turned on the heat and took him back out. Beat him again, and put him back in until he was burnt alive. I did nothing to stop it. I suppose I could have brandished my weapon or shot in the air, but I was not inclined to do so.”

Mr Sands, who has an intimate knowledge of Nuremberg, made clear that it nearly didn’t happen — because Winston Churchill “didn’t want a trial. He wanted them [the captured Nazis] lined up and shot”.

Churchill was talked round by US President Roosevelt, and by Stalin, who, Mr Sands says, “wanted a show trial.” Though the three men met at Yalta in February 1945 when the war was almost at an end, it was not until July 1945, in London, that a meeting took place to hammer out what became known as the Nuremberg Statute, the list of crimes under which the Nazis would be prosecuted.

That list was created with the input of two Jewish lawyers, says Mr Sands. One was Hersch Lauterpacht, a Galician-born immigrant to Britain who became a Cambridge professor and who devised Article Six of the Nuremberg Statute, which refers to crimes against humanity, war crimes and the crime of aggression. The other man was Raphael Lemkin, a Polish-Jewish lawyer who coined the word “genocide”, and who was adviser to the American chief prosecutor at Nuremberg, Robert Jackson.

The memory of this 100 year-old Jew isn’t as “sharp” as he thinks it is — he and his fellow Jewish lawyers made up the laws to prosecute the Germans after the war had ended.

In other words, all the “crimes” the Germans were charged with were not crimes prior and during the war — these Jewish lawyers created new laws to match the imaginary evidence that they falsely charged the Germans with, as historian David Irving observed in his authoritative book, Nuremberg: The Last Battle.

And that is why Churchill wanted the Germans executed without a trial — because he was concerned that if the surrendered Germans were given a public forum to defend themselves and tell their side of the war, the world would find out that it was Churchill and his cronies who were the actual “war criminals”.

But the Jewish lawyers made sure to structure the rules of the “show trials” in such a way that none of the witnesses for the prosecution — Jews who claim they saw “gas chambers” with their own eyes — could be cross-examined by the defense attorneys.

So, regardless of how outlandish and preposterous their eye witness accounts were — the court would shield them from being factually challenged at any point — in fact, the “impartial” judges would often blatantly coach the witnesses while under oath.

And notice how Ferencz cleverly makes it sound like he was some sort of first-hand eye witness to these German “atrocities” when in fact all he saw was the alleged “documentation” to support these charges — much of which lacked so little credibility that they have since been relegated to the memory hole.

Nor should we expect him to “remember” or even be aware that many of those piles of “Jewish” corpses he supposedly saw at Dachau and the like were actually dead German soldiers staged there by the Allies for propaganda purposes.

It should come as no surprise that Ferencz himself would fabricate this ridiculous story about an “SS man” being burned alive by wrathful Jews (“DP’s”) after the war — we know it’s a lie because he claims he saw these Jews “turn on the heat” of the ovens — the problem is that these weren’t gas ovens but rather used coal as fuel — according to “authoritative” Jewish sources.

But like all Jewish witnesses, Ferencz can make these outlandish claims because he knows he will never be challenged — in fact, in many countries in Europe, you could be thrown in prison for questioning his Jewish Version™ of World War II.