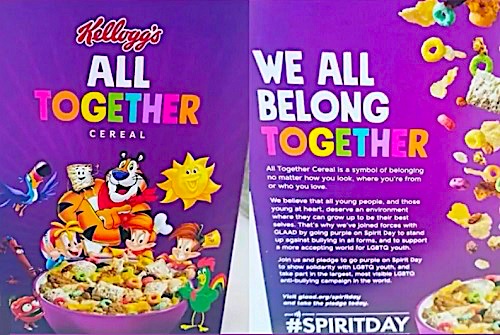 In conjunction with a $50,000 donation to GLAAD (Gay & Lesbian Alliance Against Defamation), Kellogg’s has announced the release of a new breakfast cereal to help promote the gay agenda to children:

We all belong together. So for the first time in history, our famous mascots and cereals are offered exclusively together in the same box for All Together Cereal. It’s a symbol of acceptance no matter how you look, where you’re from or who you love.

We believe that all people deserve an environment where they can be their best selves. That’s why Kellogg’s has joined forces as an official partner of GLAAD to celebrate Spirit Day, the largest most visible anti-bullying campaign in the world where millions wear purple to stand up against bullying, and to support a more accepting world for LGBTQ youth.

Kellogg is donating $50,000 to GLAAD to support their anti-bullying and LGBTQ advocacy work.

Each limited edition box of All Together Cereal includes individual boxes: Raisin Bran, Corn Flakes, Rice Krispies, Frosted Flakes, Froot Loops and Frosted Mini Wheats. To learn more about Spirit Day and take the pledge to stand up against bullying go to: https://www.glaad.org/spiritday#intro

GLAAD is essentially the ADL for sodomites and mental patients with undiagnosed gender dysphoria.  Its agenda isn’t to protect the “rights” of the LGBT community, but rather to promote their deviant ideology, subvert traditional Christian society, and ultimately normalize pedophilia.

And it’s hard not to notice the similarity between this “Spirit Day” and “Spirit Cooking,” a vile, satanic ritual performed by pedophiles and other deviants involved in the Pizzagate scandal.

Kellogg’s has made its vast fortune selling breakfast cereals to America’s children, and now they are stabbing those children and families in the back by financing an organization that is openly hostile to normal families.

If a billion dollar, multi-national corporation like Kellogg’s is promoting the radical LGBT agenda, then it is only reasonable to conclude that sodomites and pedophiles are now considered a powerful part of “The Establishment,” and people in the LGBT community are not rebelling against anything but rather upholding the “new normal” values.

And anyone who objects to these “values” is an “extremist” and potential “enemy of the people” in this new and improved Bolshevik America.