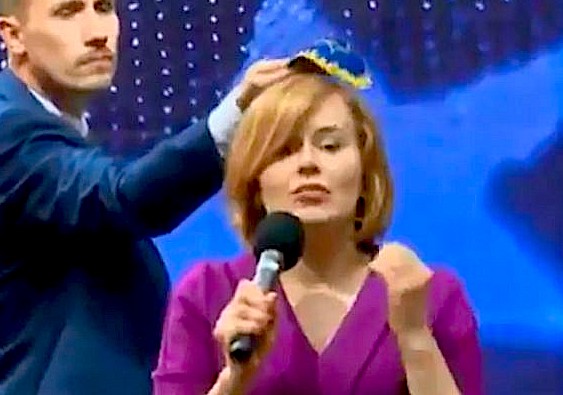 Deputy Minister of Sports and Tourism Anna Krupka was presenting her party’s views when Konrad Berkowicz [Korwin] approached her from behind and placed a Jewish skullcap above her head as she was speaking:

Krupka is a member of the current ruling Law and Justice Party [PiS]. The incident was aired on a local television channel in Kielce.

“They [PiS] bow down to Jews,” Berkowicz reportedly said. “They will sell this country for money.”

Writing on his Facebook page, Berkowitz said he only placed the kippa on Krupka’s head when she was “foaming at the mouth and talking about kneeling in front of [Russian leader Vladimir] Putin.”

He claimed he only placed it in the air to “remind the public who is kneeling in front of whom.”

Poland recently witnessed street demonstrations under the banner “This is Polska [Poland] and not Polin [the Hebrew name for the country]” after various Polish media outlets expressed fear that Israel and world Jewish organizations had set out to retrieve Jewish prosperity in Poland.

In part, the protests were sparked by the American Act 447, the JUST Act, which requires the US government to report on property lost by Jews in Europe due to the Holocaust. Many Poles view the focus on Jewish property lost during the Holocaust – as opposed to Polish property lost in what is modern Ukraine Belarus and Lithuania – as another example of how Jewish suffering is being treated differently than their own.

Berkowicz’s party, Korwin, is a member of a coalition of right-wing parties called the confederation. This radical coalition is composed of extreme right-wing parties as well as Korwin party leader Janusz Korwin-Mikke. His party is often seen as the extreme libertarian party in the coalition, sending out a strong message of tearing down the existing social order for a promised better future.

Anna Krupka is the very definition of a Judas Goat, a non-Jew who is willing to sell out her own people for political gain and please her jewish handlers.  The Jews would have never gained so much power in our Christian naitons if we did not have these Judas Goats among our own people, which makes them even more subversive than the Jews themselves.  That’s why this symbolic gesture is so powerful; it stigmatizes those who are willing to betray our own nations for thirty pieces of silver.  For her treachery, Krupka deserves far worse punishment than merely having a yarmulke placed on her head.

But this gesture wasn’t just a warning to the Judas Goats in Poland.  It also serves as a warning to the Jews who are working feverishly to undermine and subvert this White Christian nation.  Perhaps the next law in Poland will be to strip all Judas Goats like Krupka of their citizenship and give them a one-way plane ticket to Tel Aviv.  As long as the Poles continue to make being a Judas Goat a political liability, the Jews will have a very difficult time remaking Poland into their own image.  But unlike the rest of Europe, the Poles have far more experience with Jews historically and seem to know how to neutralize them politically, even with a humorous yarmulke.