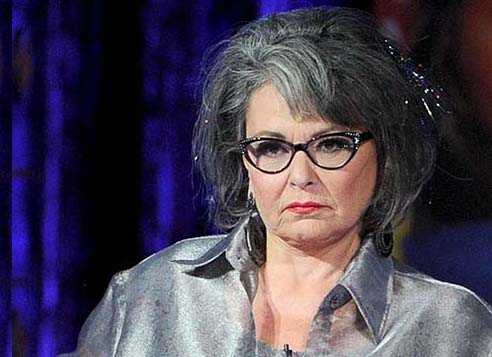 Roseanne Barr is now claiming that ABC, which is headed by Ben Sherwood and Karey Burke, both of whom are jewish, fired her because she’s jewish:

Barr was fired by ABC in May, less than a day after she sent a racist tweet about Valerie Jarrett, a former adviser in the Obama administration, writing: “Muslim Brotherhood & Planet of the Apes had a baby=vj.”

Within hours, ABC said it was canceling Roseanne, which was rebooted earlier that year to massive ratings. At the time, the network said Barr’s tweet was “abhorrent, repugnant and inconsistent with our values, and we have decided to cancel her show.” The following month, the network decided to bring back the show but without Barr, and title it “The Conners.”

In the interview this week, Barr said the executives at ABC treated her unfairly because she is Jewish and supports Israel.

“What I said was mischaracterized purposely and repeatedly, so they didn’t even know what I meant, but they wanted to shape it and they did – they said it was something racial, when it was actually something political,” she said. “And I have never in my life done anything racist, and I think my career proves that. And they did it so quickly – to fire and label and slander my name. I think it had a lot to do with identifying with Israel.”

In just two weeks, Barr will be arriving in Israel, accompanied by her friend and mentor Rabbi Shmuley Boteach. She is slated to speak at the Knesset on January 31, as well as hold other public events around the country.

Throughout the turmoil of the past year, Boteach has supported and defended Barr against the media onslaught.

“She wrote one tweet, she apologized for it, she cried, she asked Valerie Jarett publicly for forgiveness, she humbled herself,” Boteach said, adding that her treatment was harsh and hasty compared to many in Hollywood who have been accused of much worse in the past two years.

Barr said she will be discussing her firing from the show further in her Knesset speech, as well as her ties to Israel, her experiences with antisemitism and her opposition to BDS.

“I want Israelis to know what it’s like to be an American Jew, so I’ll be speaking about that,” she said. “You guys don’t go through the antisemitism that we go through in America.”

Barr, who said she experienced a lot of antisemitism growing up in Utah in the 1950s, told the Post that she turned to Judaism in particular over the past year.

“It is something that I always turn to, and it strengthened my resolve to become more public about it,” she said. “I decided that this was the time to stand up to be counted.”

Yes, she did once describe herself as a “fat, old Jew,” but that doesn’t make her a “self-hating” Jew.  And it would be very convenient to write off Roseanne as a self-admitted mental patient, but there’s much more to it.  Jews are far more susceptible than the general public to mental illness, and a whopping 40% more likely to be diagnosed with schizophrenia.  It’s hard not to suspect that the constant whining we hear from Jews literally every day in the media about an antisemitic boogeyman might, in fact, be the result of this underlying genetic proclivity toward being both mentally and emotionally unhinged.

It’s gotten so bad that some Jews in England are going to have a memorial service for some unidentified remains which have been sitting on a shelf in Bushey Cemetery for the last 20 years, and which some unidentified person claimed may have come from Auschwitz, but no one is really certain where they came from.  A simple DNA test would immediately reveal whether or not the remains were jewish, but unfortunately at this time, DNA tests are not yet sophisticated enough to determine if someone has actually been in a concentration camp, though a team of epi-geneticists in Israel is probably working on that as we speak.