U.K. Police Arrest 3 For Believing that Jews Are Not Above Criticism 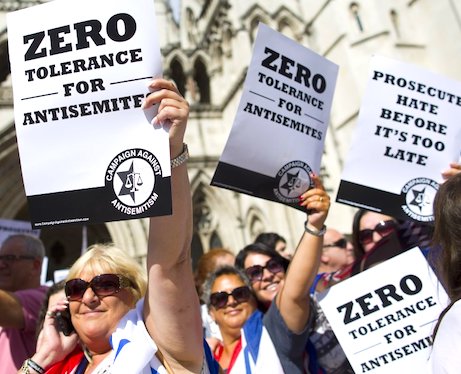 The Labour Party faces further controversy after it emerged that three people who are no longer Party members have been arrested by police investigating allegations of antisemitism among party members:

Two men and a woman were detained in the past three weeks on suspicion of publishing or distributing material likely to stir up racial hatred. They were released pending further inquiries.

The police probe was prompted by an internal Labour dossier detailing anti-Semitic social media messages allegedly posted by party members, which was obtained by LBC radio.

Two of those arrested were Patricia Sheerin, 72, from Wandsworth, south London, and Roy Smart, 50, from Tunbridge Wells, Kent, it emerged last night. Both allegedly posted about the Holocaust on social media. LBC’s documents included details of 45 cases of alleged anti-Semitism, including one which read: ‘We shall rid the Jews who are a cancer on us all.’

Others included a threat to throw two MPs off the top of a building and one that said a ‘Zionist extremist MP who hates civilised people’ was going to ‘get a good kicking’.

Despite knowing of the threats, Labour did not pass the dossier to police. The radio station handed it to Scotland Yard Commissioner Cressida Dick in September. Last night Jewish groups said the party’s failure to hand over the document was proof it is institutionally anti-Semitic.

…It is understood that none of the three detained is still a member of the Labour Party.

…Last week Miss Sheerin’s daughter Kate wrote on Facebook that six or seven officers were searching her mother’s home. Miss Sheerin later wrote that her computer and mobile phone had been seized.

Mr Smart’s wife confirmed yesterday that he had been arrested. He had been due to stand as a Labour candidate in council elections in Tunbridge Wells but is now not doing so.

This is exactly what the Jews have been working toward for the last 100 years: arrests and jail time for anyone who criticizes them or for anyone who even notices that Jews exist.  The first order of business of the so-called “Russian” Revolution was to make antisemitism a capital offense.  This draconian measure was necessary because the vast majority of the leaders of the “Revolution” were state-less international Jews, not Russians, and the tens of millions of victims were White Christians, not Jews.  If you noticed this disparity, you were arrested and sent to the Gulags if you were lucky.  If you weren’t so lucky, they simply put a bullet in the back of your head wherever they arrested you.

And now we are seeing a resurrection of this jewish con game where anyone who dares notice that Jews are behind some of the most egregious offenses against “humanity”, whether it’s the genocide in Gaza and the West Bank, or the flooding of Europe with violent Third World migrants, or the never ending “war” in the Middle East to eliminate Israel’s “existential” enemies who are all labeled as “antisemites”.  And now they are coming for any of you who dare notice any of these crimes.  Just shut up and take it, goy.  If you criticize Jews, you are now an “enemy of the people” because only Jews are people.