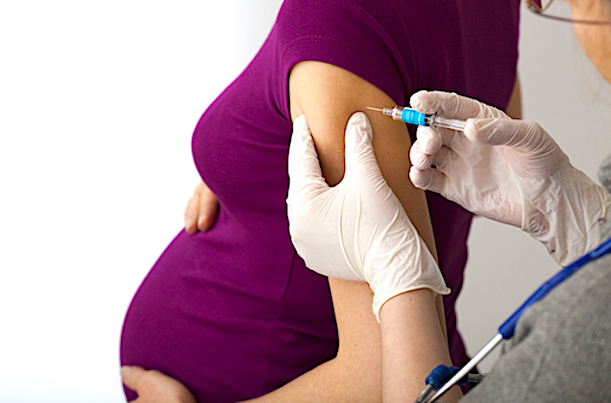 Despite the lack of any properly controlled studies conducted on the subject, so-called ‘experts’ are nevertheless going against all known safety protocols and recommending that pregnant women be the first in line to receive the new and experimental COVID-19 vaccines when they are released later this year:

…If a vaccine is approved for widespread use sometime in the fall or winter of 2020, it’s not going to be plentiful and only certain people would be eligible to get vaccinated at first. During the meeting, the CDC’s Advisory Committee on Immunization Practices created a five-stage plan to administer the vaccine.

Surprisingly, this plan included giving first priority to pregnant women. Traditionally, they are the last ones to receive a vaccine just in case it harms the fetus. The reason for making them a priority is due to the fact that there’s a good chance that pregnant women may get hit with severe symptoms if they catch COVID-19. The Center for Disease Control recently performed a limited study and published the results in their Morbidity and Mortality Report. They looked at 90,000 women between the ages of 15 to 44 years old that had confirmed cases of COVID-19. The results showed that 8,200 of the subjects were pregnant at the time of the study.

They had a 1.5 times higher risk of being admitted into the intensive care unit due to their symptoms and a 1.7 risk of winding up on a ventilator. Dr. Denise Jamieson of Emory University hopes that the results of the study will add further fuel to the fire about pregnant women needing to be vaccinated ASAP. “The study is fairly compelling evidence that pregnant women should be prioritized for a vaccine, even though their risk isn’t as pronounced as the elderly.” Dr. Jamieson told Science Mag.

Sonja Rasmussen, a pediatrician at the University of Florida and one of Jamieson’s past co-collaborator on a number of studies agrees with her friend. She pointed out that researchers are still gathering data on the novel coronavirus and there’s a chance that it could affect the fetus too. “We’re trying to make really tough life-and-death decisions, and I don’t think we can go too far making recommendations right now because we’re still collecting data,” Rasmussen explained.

Notice that they don’t tell you just how many pregnant women ended up on ventilators (which actually made the symptoms worse) — or what methods were used to diagnose these women as coronavirus patients.

And notice they acknowledge that their “risk isn’t as pronounced as the elderly,” but they don’t tell you how much less — which is important considering 95% of corona deaths are among the elderly with pre-existing medical conditions.

They even admit that vaccinating pregnant women with experimental vaccines goes against all previous medical protocols, but for some unexplained reason, coronavirus is the exception to that common sense rule.

And this article also conveniently fails to mention that seasonal flu shots commonly cause miscarriages in pregnant women — yet they recommend them anyway — because they know most women will never question the ‘experts’.

It’s hard not to conclude that the corona vaccines could very well also act as abortificants — after all, if we know of the risks, then the CDC and the vaccine manufacturers must also know the risks.

Why else would they be so insistent that pregnant women, against all safety protocols, be first in line to get the vaccines?

And keep in mind that biblical prophecy predicted that such drugs would be an essential part of Mystery Babylon.