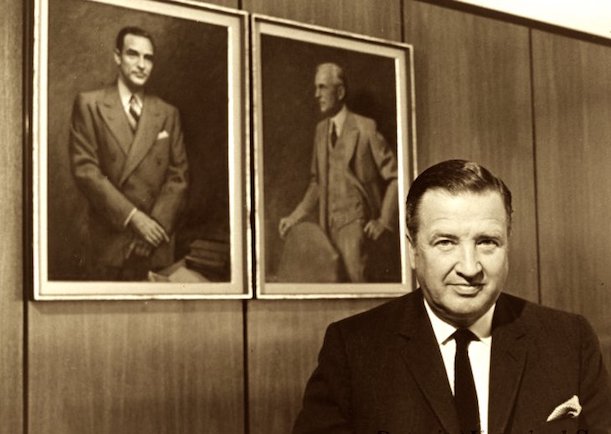 After spending his lifetime and part of his fortune trying to warn the American people of the dangers of Jewish power, Henry Ford fortunately didn’t live long enough to see his grandson, Henry Ford II, do a complete about-face and not only embrace the Jews — but also Israel as well:

Everything negative said about Henry Ford is true — except the conventional wisdom that Ford’s antisemitic fury was spent by 1927. Ford was frightened by a $1 million libel suit brought against him by Aaron Sapiro, and eventually closed down his newspaper, the Dearborn Independent.

Yet Ford’s antisemitism was not done. In 1938, at the time of the Anschluss between Nazi Germany and Austria, Ford accepted a 75th birthday gift from Hitler’s consulate in Detroit: the Grand Cross of the Supreme Order of the German Eagle. Ford and Hitler had admired each other since the 1920s. Ford also privately became a fan of rabble-rousing antisemitic preacher Gerald L. K. Smith. In 1940, he confided that he was sure Jews were conspiring to manipulate the US into a new world war.

The story of Henry Ford’s grandson and namesake was very different. During World War II, young Henry (nicknamed “Hank the Deuce”) was a young naval officer in the Pacific. In 1943, when his father Edsel died, his grandfather resumed command of the company, despite showing signs of senility. Only in 1945 did Henry Ford II become president.

Among his first acts was to hire the younger generation of executives, the “Whiz Kids,” including Robert McNamara, who turned Ford Motor around. He alone healed Ford’s relationship with the Jews.

In 1949, when the Truman White House received a fleet of Lincoln limousines, the last produced went to Chaim Weizmann, whom Ford II met during the Israeli president’s tour of the US. In 1950, Hank the Deuce made a $50,000 contribution to the United Jewish Appeal’s Christian Committee Campaign for Israel. Around the time of the Six-Day War in 1967, Ford II without fanfare gave his friend, oil executive Max Fisher, a hand-written note with a $100,000 check for the Israel Emergency Fund.

Maintaining his business with the Jewish state after 1973, he refused to give in to boycott threats, despite losses across the Arab world. Ford defied the boycott while companies like Pepsi Cola, with heavy Jewish investment, capitulated. During the Yom Kippur War, when a Jewish engineer told him that Israel needed tank carriers, the Deuce supplied them at a critical juncture.

This article provides no explanation as to why the young and inexperienced Henry Ford II capitulated to the Jews — but given his desire to prove himself in his new role of CEO, perhaps he saw offering an “olive branch” to the Jews as a way to ensure his success.

In fact, Ford II openly admitted that he sought to get on more friendly terms with the Jews as a public relations strategy,

It was just pragmatic business procedure… I don’t mind saying I was influenced in part by the fact that the company still suffers from a resentment against the anti-Semitism of the distant past.  We want to overcome that.

Either way, there are a few inaccuracies in this article — but the most important being that Henry Ford was allegedly “frightened” over the lawsuit brought against him by the Jew Shapiro for “libel” which is what caused him to back off the “Jew thing”.

To settle the bogus lawsuit, Ford begrudgingly signed a letter of apology to Shapiro — which he no doubt did out of practicality rather than principle — and some even speculate that Ford had someone else sign if name to the letter as a way of protesting its contents.

No, what truly “frightened” Henry Ford off “the Jew thing” was that the Jews had apparently hired a hitman who ran Ford’s car off the road one night, very nearly killing him — this was the event that made him have a “change of heart” — they were willing to kill him and perhaps his family to shut him up.

So his grandson tried to placate the Jews with gifts — like giving “tributes” to a Mafia boss or kissing the Pope’s ring — and, of course, eventually the Jews did take over the company and aptly planned to put Israeli spyware in all new Ford Motor cars — instead of a free copy of The International Jew — the way his honest grandfather, Henry Ford I, did.