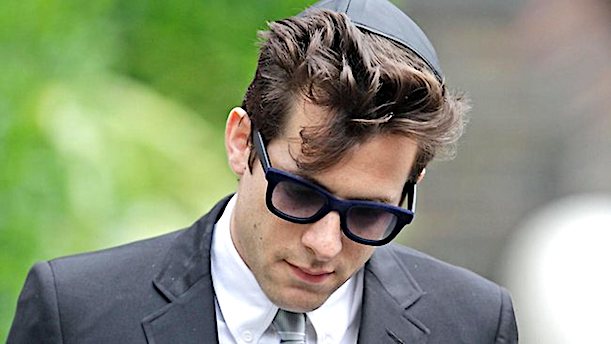 The Jewish pop star and producer Mark Ronson has hit back at claims made by the antisemitic rapper Wiley about Jewish domination of the music industry:

Reacting to the publication of the inflammatory interview with the Grime star published by black newspaper The Voice, Mr Ronson tweeted: “Jews do not run the music business in some secret cabal (and if they do it’s mad f**ked up i havent been invited yet). [sic]”

The musician – best known for his Uptown Funk hit and his work with Amy Winehouse – also took issue with comments made by the Voice journalist, who wrote of claims “you need to get a Jewish lawyer in order to progress in the music business”.

Mr Ronson, who has regularly discussed his pride over his Jewish background, responded by tweeting: “MY LAWYER IS ITALIAN. My label is run by a Gentile, & owned by a Japanese board.”

Addressing Wiley’s claims that Jewish music business executives were responsible for offering contracts that left artists being treated like slaves, Mr Ronson wrote: “Many of us know that record deals can often be some of the most god-awfully unfair contracts in business.

He then criticised The Voice for the tone of the article, published on Wednesday, saying: “Throwing fuel on the fire with poorly researched articles that perpetuate dangerous myths by pretending to pose questions is not the way forward.”

The controversial Voice article was written journalist Joel Campbell – arts and entertainment editor of The Voice – who asked: “Within his ranting were there any salient points?”

Mr Campbell then suggested Wiley was “not alone in his thinking, that there is an unspoken systemic oppression that blights the lives of young black creatives in the entertainment space.”

After the article appeared online on Wednesday evening, it was widely condemned. Leading QC David Wolfson expressed his view on Twitter: “I do not exaggerate. This article is a 2020 version of Der Sturmer.”

Meanwhile the JC understands that senior Jewish and black figures in the music industry and within communal organisations have held urgent discussions in recent days to avoid the debate around Wiley’s antisemitic remarks escalating.

Discussions are said to have been “highly constructive”, with positive interventions from both sides.

Speaking to the JC in 2014, Mr Ronson said he was proud of the way “Jewish people have been at the forefront of many charity movements of the past 100 years. [And] look at anti-apartheid.”

If anyone in the music industry has benefited from being Jewish it’s the talentless hack Mark Ronson — whose family at one time was among the wealthiest Jews in Britain — and his divorced mother, like many Jewesses, just so happened to remarry a rock star, Mick Jones, the lead guitarist of the group Foreigner.

But Mark Ronson’s pathetic denial is typical of how Jews disavow their dominance — they come up with one or two examples where Jews aren’t in control of a music company — but all they end up doing is showing that the “exception proves the rule.”

Jews absolutely dominate the music industry — and they have done so for over last 100 years.

Just ask John Fogarty of Creedence Clearwater Revival what it’s like to literally turn your entire life’s work over to a Jew who got you to sign an unconscionable contract at the beginning of your career.

Michael Jackson wrote the song “They Don’t Care About Us” specifically about all the Jewish shysters in the music industry who had ripped him off — and it was this song, many believe, that was the cause of his ‘untimely’ death:

Jew me, sue me
Everybody do me
Kick me, kike me
Don’t you black or white me

Ironically, to ‘celebrate’ Michael Jackson’s 60th birthday in 2018, Mark Ronson’s Jewish privilege got him hired to produce a special lame dance mix of Michael Jackson’s hits, but he conveniently left out “They Don’t Care About Us.”  Go figure.

And, yes, Wiley is correct — Jews, like Rick Rubin and Lyor Cohen, have also dominated the Rap/Hip Hop industry from its beginnings.

But if you’re Jewish, they will find plenty of work for you in the music industry — even if you don’t have any talent — all you need is a yarmulke and you are virtually guaranteed to win an Emmy for something or another, like the hack Don Black.

On the one hand, among themselves, Jews are proud of how they control the entertainment industries, but when the goyim start talking about it, they bristle and get nervous and cry about how ‘dangerous’ such talk is.

In their crooked minds if the goyim first start talking about the Jewish control of the music industry, and the next thing you know, those irrational goyim will round up the Jews put them in fake ‘gas chambers’ for their crimes against humanity.

And Mark Ronson’s ‘ultimate proof’ that Jews don’t dominate the music industry against all common sense?  Jews donate their ill-gotten wealth to charities — Jewish charities mostly — and they dominated the anti-Apartheid movement, which has lead to the destruction of South Africa — and destroyed the lives of the Blacks there — not just the ‘racist’ Whites.

No one takes Ronson seriously — either as a so-called ‘artist’ or his denials of Jewish privilege.