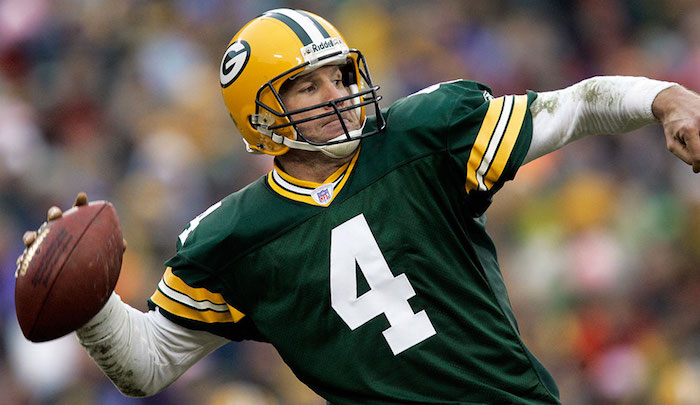 Former NFL great, Brett Favre, appeared in a brief twenty second video clip posted online in which he endorsed the GDL, or Goyim Defense League, and threw in his support for the survivors of the treacherous Israeli attack on the USS Liberty:

Brett Favre here with a shout out to the Handsome Truth and the GDL boys. You guys are patriots in my eyes. So keep wakin’ em up and don’t let the small get you down. Keep fighting too. Don’t ever forget the USS Liberty and the men and women who died on that day. God bless and take care.

The Jews will not like this at all — their success in taking complete control over our White society depends on their ability to silence our celebrities whose voices carry weight.  And because celebrities have so much to lose by speaking out against the Jews, very few of them ever have the courage to criticize them, because when they do, as in the case of Mel Gibson, the jewish media goes into full attack mode until the “antisemitic” goy relents and apologizes.  Of course, although Favre has some deniability over this video in that he was apparently paid to make it for a sponsor, he nonetheless has kicked a jewish hornet’s nest.

The question is whether or not the Jews will just ignore this video and let it disappear, or address it and attack Favre across the media, including on ESPN and other jewish mouthpieces.  By attacking Favre they risk waking up millions of people who will look into the Israeli attack on the USS Liberty, which could result in millions of people souring on the U.S. support for this criminal regime.  It also opens a can of worms concerning the zionist orchestration of the 9-11 attacks and their involvement in the JFK assassination.

But Jews rarely can show such restraint, and their first impulse is often to destroy anyone, especially a celebrity like Favre, who challenges the status quo and wakes up the sheep.  Either way, the good news is that if Brett Favre is hip to the Jewish Question, then there are many other White celebrities who know what he knows, and if they all come out at once in support of each other, the Jews are going to have a huge problem on their hands.