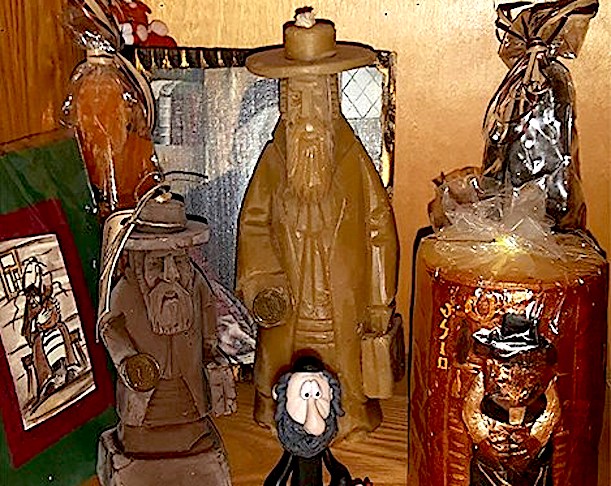 Even among Jews in Poland, few are shocked at this point by the popular figurines of haredi Orthodox Jews counting money that are sold there as good luck charms:

Yet even locals are pausing to take stock of the latest development on that controversial theme: scented candles that one retailer advertised as “giving a pleasant warm light during combustion.” Also, “The figure of the Jew is believed to be good for financial success.”

At least two firms, Beekeeping Łukasiewicz Center and the Łysoń Beekeeping Company, have offered the products online, according to Elżbieta Magenheim, the manager of Życie Żydowskie.

Multiple members of the Facebook group have expressed outrage because the product reminded them of how the Nazis had bodies of Jews burned in crematoria during the Holocaust in occupied Poland.

Both firms removed the products from their online catalog after Jewish.pl, a Polish Jewish news site, published an article Sunday about Magenheim’s discovery. Neither replied to a request for comment by the Jewish Telegraphic Agency.

Łukasiewicz offered two sizes, called “Little Jew” and “big Jews,” measuring 4 and 7 inches, respectively. “A hand-cast beeswax candle. The figure of the Jew is believed to be good for financial success. Impressive, large, it gives a pleasant warm light during combustion and a pleasant aroma of honey and propolis,” the product description read.

The sale of stereotypical images of Jews as good luck charms started in Poland in the 1960s. It closely followed the last large wave of Jewish emigration from the country, where 3.3 million Jews lived before the Holocaust. Only 20,000 Jews live there now.

Critics believe it is an expression of centuries of anti-Semitic bias in a country whose society and government are famously struggling with the tragic history of Poland’s once-great Jewish community.

Others dismiss it as an insensitive but ultimately harmless expression of nostalgia, as defined by Jonny Daniels, founder of the From the Depths group that promotes dialogue between Jews and Poles. Daniels said it was similar to how some view cigar store Indians in the United States.

The candles are “disgusting,” one Jewish.pl contributor, Jan Gelbert, told the website. But he added there was no attempt to allude to the Holocaust through the candles.

“I believe that was not what the authors meant,” he said of the descriptions. “I think there was just no reflection.”

Jews have a well-deserved reputation in Poland of being “good with money” after centuries of conspiring with the Polish aristocracy to economically exploit the peasantry — and keep them impoverished as their virtual slaves.

Don’t take our word for it, here’s what Rabbi Avigdor Miller admitted in his book Rejoice O Youth:

Amid these conditions, our people were never enslaved into serfdom; and, despised as they were, they always retained a form of freedom and dignity, which was below aristocracy but high above serfdom.  In every land of their exile, Jews lived with higher economic standards than the majority of the native inhabitants.  Very frequently, they had gentile servants, whereas a Jew was almost never reduced to being a servant. —Rabbi Avigdor Miller, “Rejoice O Youth” (2010), p. 145

Of course, after exploiting the Polish peasantry for centuries, Rabbi Miller turns around and criticizes them for being poor and backwards:

When the Jews in Spain began to use that wealthy land as a means of mingling with the Arabs and Spaniards, G-d’s plan caused them to be expelled to lands of lesser culture, such as Turkey and Poland, with whom our people had no incentive to assimilate.  Among these nations, G-d permitted the Jews to live in relative peace for centuries; for there was no danger that they would imitate the ways of the poor and backward populace.  But those of our people who dwelt among the Germans, French, and English were tempted to mingle with them; for their higher living standards created a lure.  You see how our nation adopted the German language, but not Polish or Turkish.  —Rabbi Avigdor Miller, “Rejoice O Youth” (2010), pp. 276-77

No, “G-d” didn’t expel the Jews from Spain for “mingling” with the Arabs and Spanish — the Spanish expelled them for destroying their nation and people — by infiltrating the Catholic Church as fake Christians in order to Judaize it.

And, yes, some fled Spain for Turkey and Poland — where their co-ethnics had an iron grip on the nation’s economy — and where they were assured of an easy life without the necessity of having to actually work for a living.

Jews have always been economic migrants — their “noble” idea of searching for a “better life” means finding a place to live where they can exploit the local population and live off the fruits of others’ honest labor — they are the ultimate exploitative ruling class that Karl Marx, hypocritically, railed against.

And then they have the audacity to complain when the local peasantry rises up against their exploiters and chase them out of their country — when the peasantry attempts to emancipate themselves from their Jewish exploiters, Jews claim they are “victims” of another “pogrom.”

After exploiting the Poles economically for centuries, they turned around and sold them out to their ruthless communist co-ethnics — many books have been written demonstrating how Jews repeatedly betrayed the Polish nation which  welcomed them time and again when no one else wanted them.

After all this first-hand experience with Jewish perfidy, can Jews really blame the Poles for experiencing a small moment of enjoyment as they watch the figure of a wealthy Jew melt into a fragrant lump of wax?

“Under Capitalism, man exploits man — under Socialism, the reverse is true.”
—Polish Proverb