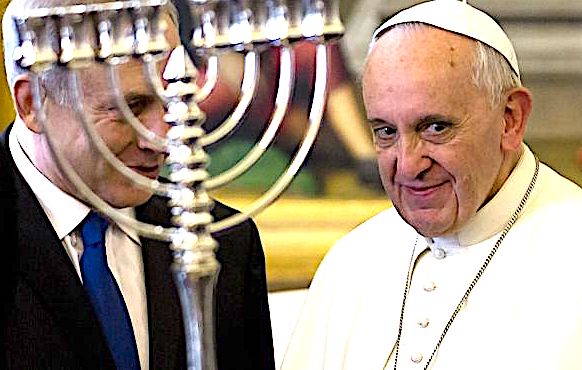 Under the heading “Responding to the Pandemic, Lessons for Future Actions and Changing Priorities,” the scientific bodies attached to the Catholic Church reveal much of their globalist mindset while remaining totally silent with regard to the Catholic faith.

There is not a single mention of Jesus-Christ, nor even of God – whose existence is known through the observation of our senses and the use of our reason – in the 1,400-word statement.

Also of interest is the list of signatories, which includes several names well-known in the scientific community that believes global warming exists due to human activity and that one way of fighting is to check or curb the total global population, seen as nature’s prime enemy.

While chaos reigns in a number of countries – such as Italy, Spain, and parts of France – where the coronavirus revealed the insufficient amount of ICU units to meet the needs of many victims who fell gravely ill in a relatively short period of time, others have responded in a way that has prevented the Chinese virus from doing the same kind of harm, such as Taiwan South Korea, Germany, and Portugal.

But instead of giving a reasoned perspective based on experience and best practices in these countries, the PAS and PASS focus on compliance with the guidelines of the World Health Organization (WHO), the United Nations’ globalist health division.

It was WHO that congratulated Communist China for its model management of the coronavirus epidemic in Wuhan.

The WHO also rejected widespread use of hydroxychloroquine to treat COVID-19 positive patients, although in Marseille, France, where Dr Didier Raoult and his specialized unit in infectiology is obtaining good results with the molecule in combination with antibiotics. There are spectacularly fewer deaths linked to the coronavirus in Marseille than in the rest of France, where his protocol is only being sparsely applied.

…The statement called on papal expressions to justify a supranational response to the coronavirus crisis:

“We are concerned about the selfishness and shortsightedness of uncoordinated national responses. This is the time to prove that the ‘Family of Nations’ (Paul VI and John Paul II) or the ‘Family of Peoples’ (Pope Francis) are communities of values with a common origin and shared destiny.”

The simple fact is the Catholic Church isn’t Christian, and hasn’t been, not merely since ‘Vatican II’ when it was ostensibly ‘judaized’, but very likely from its very foundations.

It should surprise no one that the Catholic Church pushes jewish ‘globalization’ — one-world government/one-world religion — as it is the logical conclusion of how the Catholics universalized the Christian faith, in direct contradiction to scripture.

It was the Catholic Church that unilaterally — and without scriptural justification — declared through an arbitrary papal bull that race was not a consideration in converting to Christianity.

And considering that so many of the Catholic Popes have been racial Jews, this disregard for race by The Church was obviously done at the behest of the countless crypto Jews within the Church’s ranks.

Don’t take our word for it — read Popes From The Ghetto (1966) by the jewish writer Joachim Prinz, and you’ll see just how common this phenomenon was.

The Jesuit order, the most powerful in the Church, was founded by a crypto-Jew, Ignatius Loyola.

And if Khazar Jews can be Christians — and even Popes — why stop there?  Anyone can be part of the club.

Even Martin Luther struggled with this deception.

Just quote John 3:16 out of context, sprinkle some ‘holy’ water on them, and voila, they are now a “Christian”.

And if a Christian dares question your judaized universal ‘faith’, just cite Galatians 3:28 to silence the quarrelsome goyim.

And smear anyone as an ‘antisemite’ who doesn’t think Jews can be ‘good Christians’.

Next stop, Jerusalem where our diluted Noahide ‘Christianity’ will be proclaimed to ‘all nations’ from the Third Temple.