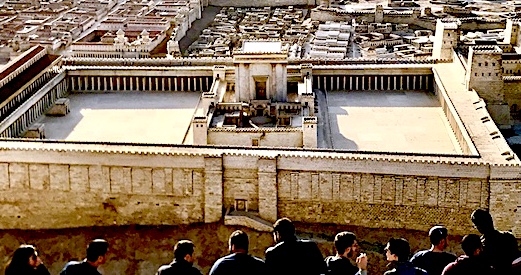 The jewish press has published an outline of how their “learned elders of Zion” will use President Trump to pave the way for the so-called Third Temple in Jerusalem, which will become the seat of a New World Government to replace the current U.N.:

Two weeks ago, two religious Jews appeared before Rabbi Cham Kanievsky, one of the most influential rabbis of this generation. The emissaries reportedly bore an inquiry from President Trump, asking when the Moshiach (Messiah) will arrive. The rabbi avoided answering the question, asking instead when the American Jews will come to live in Israel.

Many were skeptical of the story, rejecting the idea that Trump, a Christian, would inquire from a Jewish rabbi concerning the Messiah. But Trump, as the non-Jewish leader of the U.S., has a prophesied role to play in the building of the Temple and it was for this reason he inquired. Trump wanted to know when he will be called upon to perform this role.

The comparison was so apt that it was adopted by Israeli Prime Minister Netanyahu who also compared the U.S. president to the Persian King.

Rabbi Hillel Weiss, the spokesman for the Sanhedrin, noted, “Trump can lead the nations of the world to global peace through building the Temple, the source of peace,” Rabbi Weiss explained. “This will offset the disgraceful United Nations resolutions that are the root cause of increasing evil in the world.”

The Sandhedin is currently working to create an Organization of 70 Nations based in Jerusalem to replace the United Nations.

“The Jews will do the actual building of the Third Temple but in order for the Third Temple to be a House of Prayer for all nations, the nations must have a part in its creation,” Rabbi Weiss explained. “The troubles that are facing the world today are issues that can only be addressed by a higher level of international discourse and cooperation. The effort to erase national identities and national borders is diametrically opposed to this and it is this ‘new world order’ that Trump is really fighting. The solution is the Third Temple as a House of Prayer for all nations and the Organization of 70 Nations, both of which require nations to express their unique identities.”

“Trump needs to take his role as the leader in the universal return to this covenant,” Rabbi Weiss said. “He began this by rejecting the anti-Bible United Nations but just as Cyrus did, he needs to turn the world towards the Temple. Just as Abraham pleaded with Hashem (God, literally ‘the name’) in order to save the non-Jews of Sodom and Gomorrah, we are pleading and praying that Trump will turn the nations towards Jerusalem; for their sake.”

Rabbi Yoel Schwartz, the head of the Sanhedrin’s Noahide Court and a highly-respected Torah authority, emphasized that the nations of the world have a prophesied role in the building of the Temple. He based this opinion on a Midrashic (homiletic teachings) tradition of a verse in Song of Songs.

“Rabbeinu Behaye explained this is a tikkun (reparation),” Rabbi Berger said. “Rome destroyed the Second Temple so Rome’s descendants, the Christians, are going to amend this by taking part in bringing the Third Temple.”

“Like Cyrus, Trump’s connection to the Messiah is that he will play a role in one of the major functions of the Messiah. He will pave the way for building the Third Temple. Trump will not personally merit building the Temple,” he continued. “Like Cyrus, he will pave the way for men who will begin the construction, and when the time is right, the Third Temple will descend from heaven.”

“No leader in history has recognized Jerusalem as the capital of the Jews and Israel,” he pointed out. “He has already created a great tikkun (reparation) for the Christians through his unprecedented relationship with Jerusalem. Trump is the representative of Edom that will perform that final historic reparation for his entire nation by building the Temple.”

What the Jews have done here is present a complete inversion of reality and prophecy, which is exactly what we would expect them to do if we have eyes to see and ears to hear.

In the end times, the whole world will be deceived by the anti-Christ Jews, and here is a blueprint for that deception handed to you on a silver platter.  Trump is not ‘fighting against’ the so-called New World Order, as these rabbis claim.  If anything Trump has done more to accelerate this satanic plan than most previous U.S. Presidents combined, and the fate of the Al Aqsa Mosque on the Temple Mount may well be sealed in Trump’s second term in office.

To understand this massive deception, you have to understand that it’s the Jews who are the self-admitted “descendants of Edom,” and thus the rabbi was telling the partial truth when he stated that Edom will build the Third Temple, which will be the fulfillment of the real prophecies found in the Book of Obadiah.  They are also telling the truth that Trump is a “representative of Edom” because Trump is the proxy leader for the Edomite Jews in Israel and America who are orchestrating this massive deception.