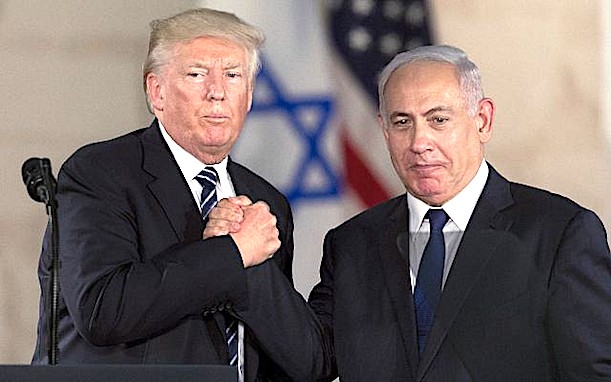 According to recently released FBI documents, Donald Trump’s longtime confidant, Roger Stone, who was convicted last year in Robert Mueller’s investigation into ties between Russia and the Trump campaign, was in contact with one or more apparently well-connected Israelis at the height of the 2016 US presidential campaign, one of whom warned Stone that Trump was “going to be defeated” unless Israel intervened in the election:

The exchange between Stone and this Jerusalem-based contact appears in FBI documents made public on Tuesday. The documents — FBI affidavits submitted to obtain search warrants in the criminal investigation into Stone — were released following a court case brought by The Associated Press and other media organizations.

A longtime adviser to Trump, Stone officially worked on the 2016 presidential campaign until August 2015, when he said he left and Trump said he was fired. However he continued to communicate with the campaign, according to Mueller’s investigation.

The FBI material, which is heavily redacted, includes one explicit reference to Israel and one to Jerusalem, and a series of references to a minister, a cabinet minister, a “minister without portfolio in the cabinet dealing with issues concerning defense and foreign affairs,” the PM, and the Prime Minister. In all these references the names and countries of the minister and prime minister are redacted.

Benjamin Netanyahu was Israel’s prime minister in 2016, and the Israeli government included a minister without portfolio, Tzachi Hanegbi, appointed in May with responsibility for defense and foreign affairs. One reference to the unnamed PM in the material reads as follows: “On or about June 28, 2016, [NAME REDACTED] messaged STONE, “RETURNING TO DC AFTER URGENT CONSULTATIONS WITH PM IN ROME.MUST MEET WITH YOU WED. EVE AND WITH DJ TRUMP THURSDAY IN NYC.” Netanyahu made a state visit to Italy at the end of June 2016.

The explicit reference to Israel appears early in the text of a May 2018 affidavit by an FBI agent in support of an application for a search warrant, and relates to communication between Stone and Jerome Corsi, an American author, commentator and conspiracy theorist. “On August 20, 2016, CORSI told STONE that they needed to meet with [NAME REDACTED] to determine “what if anything Israel plans to do in Oct,” the affidavit states.

The explicit reference to Jerusalem appears later in the same document, in the context of communication between Stone and his unnamed contact in the Israeli capital. “On or about August 12, 2016, [NAME REDACTED] messaged STONE, “Roger, hello from Jerusalem. Any progress? He is going to be defeated unless we intervene. We have critical intell. The key is in your hands! Back in the US next week. How is your Pneumonia? Thank you. STONE replied, “I am well. Matters complicated. Pondering. R” The “he” is an apparent reference to Trump.

Referring to the Israeli mentions in a report on the documents late Tuesday, the US website Politico noted: “The newly revealed messages often raise more questions than answers. They show Stone in touch with seemingly high-ranking Israeli officials attempting to arrange meetings with Trump during the heat of the 2016 campaign.”

…Mueller’s investigation identified significant contact during the 2016 campaign between Trump associates and Russians, but did not allege a criminal conspiracy to tip the outcome of the presidential election.

This story first appeared last month, at the height of the COVID-19 plandemic, which conveniently and not coincidentally allowed all the mainstream media in America to ignore it.

Of course, this story is seen as a positive development from the Israeli (and evangelical) perspective because a Trump presidency was an essential part fulfilling an aggressive Zionist “wish list” which included moving the U.S. Embassy to Jerusalem, annexing the Golan Heights and the West Bank, and perhaps a major move against Iran in the second term.

We can only guess what further information about Israel’s involvement in the election was redacted from this FBI document, but there can be little doubt that the orders to help Trump win came from the very top — from Netanyahu himself.

And Netanyahu hasn’t wasted a second of Trump’s presidency in expanding Israel’s power, territory and influence.

As one Jewish media pundit claimed, Donald Trump has been “the greatest president for Jews and for Israel in the history of the world.”

Trump has even bragged that he is so popular among Israelis that they would elect him Prime Minister if he ran.

And even if the brain-dead American public found out about this Israeli intervention (i.e., “subversion of our democracy”), they would probably just shrug it off — after all, Israel is our “most trusted friend and ally,” goyim.