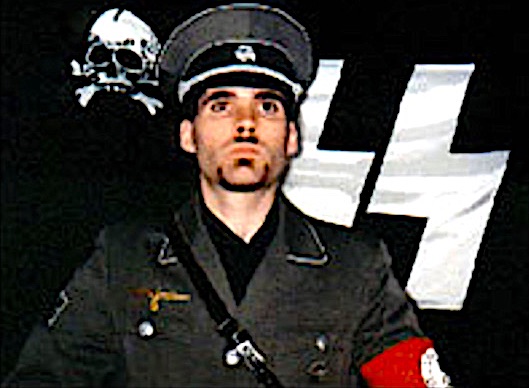 After putting police in Washington, D.C. on high alert, the American Nationalist Party, an alleged ‘Neo-Nazi’ group which had obtained a police permit in August of 1999 to march across from the White House, failed to show up for the demonstration, leaving hundreds of police in full riot gear with nothing to do:

The U.S. Park Police expects about 300 people to participate in the march and about 500 counter-demonstrators to gather in different places around the city.

Between 500 and 600 officers are expected to be on duty to protect against the kind of violence and confrontations that have marked similar demonstrations in the past….

The founder of the group is a 20-year-old South Carolina college student who has legally changed his name to Davis Wolfgang Hawke to “pay tribute” to his “long line of English relatives,” according to his personal statement on the group’s Website. His original name was Andrew Greenbaum, but Hawke claims to have no Jewish bloodlines.

“My stepfather, Hyman Greenbaum (a one-quarter Jew), is incorrectly listed on my birth certificate,” says the statement. In fact, Hawke claims, his mother had an affair with an unknown man of German descent who is Hawke’s biological father.

On his Web site statement, Hawke says the “purpose of my life, and the reason for the existence of this party, is to take back what the liberals and the Jewish ruling elite have swindled from us — White America and its proud history.”

According to the Anti-Defamation League, the American Nationalist Party, while being run out of Hawke’s college dorm room, has used its Web site to present itself as a rapidly growing organization, although there has been no evidence that the group has a significant off-line presence. The group has launched the “White Pride News Service,” which claims to send e-mail newsletters and updates about the group to “1,600 white racialists in 43 countries.”

Why is it that so many of these so-called ‘Neo-Nazi’ and ‘White supremacist’ groups turn out to be lead by Jews — that or FBI ‘honey pots’ to attract unstable loners into committing illegal violent acts?

This phenomenon of Jewish antisemites™ and Neo-Nazis has become enough of an obvious trend that the Jewish-funded Southern Poverty Law Center felt a need to publish a disclaimer — denying that Jewish involvement in these movements is, in any way, significant.

That claim, of course, is a total lie — the so-called ‘Alt-right’ and resurgent ‘White nationalist’ movements are both top-heavy with Jews and crypto-Jews.

It’s worth noting that the father of ‘respected’ William Potter Gale — a prominent Christian Identity leader and founder of Posse Comitatus — was the son of devout Russian émigré Jews named Grabifker, which his own daughters confirmed.

What is not widely known about Gale is that New Orleans prosecutor Jim Garrison implicated Gale, a likely FBI informant, in the criminal conspiracy to assassinate John F. Kennedy — and we now know that conspiracy was top-heavy with Jews and Israelis.

Despite all this, there are still people in these movements today who still promote the works of William ‘Grabifker’ Gale.

Which brings us back to the curious case of Andrew Greenbaum aka “Davis Wolfgang Hawke”.

After pretending to be a ‘Neo-Nazi’, Greenbaum went on to become a successful internet spammer and con artist “hawking” fake erectile dysfunction pills online — apparently a common enterprise among sex-obsessed Jews.

After that, he allegedly disappeared and was last seen in Wyoming 14 years ago in 2006.