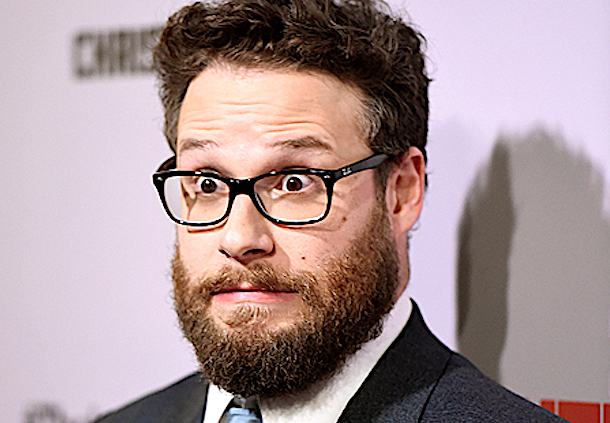 The Jewish actor, Seth Rogan, appeared the “WTF” podcast this past Monday hosted by fellow Jew Marc Maron, who warned his audience before the interview started, “If you don’t like Jews, you’re gonna get triggered”:

It was a fair disclaimer, given that his hour-long conversation with Seth Rogen touched on just about every general aspect of modern Jewish identity, from Jewish summer camp to cultural Jewishness to sitting shiva.

But a second warning came part of the way through the episode, as the conversation turned to Israel. “We’re gonna piss off a bunch of Jews,” Maron said.

Rogen, who grew up attending Jewish schools and Jewish camp in Vancouver, said he was “fed a huge amount of lies about Israel” and questioned why the state should exist. Maron, who often references his Jewishness in his standup comedy material, concurred.

Rogen: ‘To me it just seems an antiquated thought process. If it is for religious reasons, I don’t agree with it, because I think religion is silly.  If it is for truly the preservation of Jewish people, it makes no sense, because again, you don’t keep something you’re trying to preserve all in one place — especially when that place is proven to be pretty volatile, you know? ‘I’m trying to keep all these things safe, I’m gonna put them in my blender and hope that that’s the best place… that’ll do it.’ It doesn’t make sense to me. And I also think that as a Jewish person I was fed a huge amount of lies about Israel my entire life! They never tell you that — oh by the way, there were people there. They make it seem like it was just like sitting there, like the fucking door’s open!…They forget to include the fact to every young Jewish person.’

Maron: I get frightened to talk about it.

The entire conversation was what Maron called “the most Jewy talk” he has had on his popular podcast, which has aired over 1,100 episodes…

Rogen: I remember my dad frankly telling me “People hate Jews. Just be aware of that. They just do.” And it’s honestly something that I am so glad was instilled in me from a young age, because if it wasn’t, I would constantly be shocked at how much motherf***ers hate Jews, because they do! It is pervasive and it is prevalent and it is to many Jewish people so confounding that they don’t assume it’s true…I’ve tried to put a lot of thought into why it’s happened … People obviously hate people who do not look like them. … I think people also have a weird fear of people who look like them but do not believe the same thing they do fundamentally…

As a liberal Hollywood Jew, it’s still socially acceptable for Rogen to criticize Israel and show sympathy for the plight of the Palestinians — but if a non-Jewish actor expressed these same sentiments about Israel, they’d be blackballed and never work again.

While he accepts that he was lied to as a child about Israel, he never the less uncritically accepted the fatuous idea from his father that people simply hate Jews for no reason whatsoever.

A normal child would ask, “But, Dad, why would people hate us for no reason whatsoever?”  But Jews are not normal.

They have blindly accept being hated for no reason for literally thousands of years as if it is some kind of unchangeable force of nature.

And Rogen’s ‘insights’ into why Jews are hated are simply banal — because, as he admitted, he’s afraid of Jews, and he doesn’t have the guts to acknowledge the elephant in the room.

Even President Trump has openly admitted that Jews are “brutal killers” and “not nice people”.

While Rogen knows the Jews in Israel mistreat the Palestinians, but won’t dare take it a step further and conclude that Jews are hated, in part, for wontonly murdering the Palestinians and stealing their land.

Even the ultra-liberal, Jew-friendly Swedes acknowledge that when the Israelis slaughter Palestinian children, there’s a noticeable increase in ‘antisemtism’ in Sweden.

One thing is clear: Jews are far more afraid of each other than they are of any so-called ‘antisemites’.