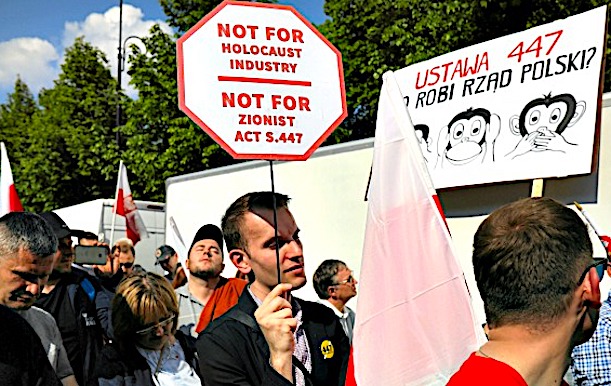 Tomasz Rzymkowski, a popular Polish politician who accused “the powerful Jewish lobby in the USA” of attempting to swindle money “that is not due to them in any way,” has been appointed as Poland’s new deputy minister for education:

Tomasz Rzymkowski was confirmed as secretary of state of Poland’s Ministry of Science and Higher Education by Prime Minister Mateusz Morawiecki on Friday.

A former member of the far-right movement “Ruch Narodowy,” Rzymkowski was a keynote speaker at a May 11, 2019 rally outside the US Embassy in Warsaw (pictured) that the AP news agency reported “appeared to be one of the largest anti-Jewish street demonstrations in recent times.”

The focus of the demonstrators ire was the passage by the US Congress of the Justice for Uncompensated Survivors Today (JUST) Act S. 447 — which calls for the US to administrate compensation for stolen Jewish property from various European countries — earlier that month.

The act provides no means of enforcement. Polish Prime Minister Marowiecki angrily rejected the legislation, claiming at the time that asking Poland to pay direct compensation for any wartime crimes amounted to a “posthumous victory for Hitler.”

Demonstrators outside the US mission chanted “This is Poland, not Polin” — the Hebrew word for Poland — with one participant complaining, “Why should we have to pay money today when nobody gives us anything? Americans only think about Jewish and not Polish interests.”

A State Department report on the issue in July 2020 reiterated earlier US concerns about Poland’s status as “the only European Union member state with significant Holocaust-era property issues” that had not passed restitution laws, noting as well that “approximately half of the 5,500 Jewish communal property claims filed under a 1997 restitution law remain unresolved, and approximately half of the adjudicated claims were rejected.”

Rzymkowski has led efforts in Sejm, Poland’s parliament, to reject the JUST Act. In May 2019, he tweeted an image of himself standing outside the White House in Washington, DC while clasping a copy of his own legislation to “protect Poland against heirless property claims.”

In one of several rhetorical swipes against the JUST Act, Rzymkowski warned in 2018 that “the powerful Jewish lobby in the USA is increasingly using political instruments to put pressure on European states to recover assets.”

While clarifying that he did not object to restitution to those with legitimate claims, Rzymkowski then accused American Jews of trying to swindle money “that is not due to them in any way.”

Rzymkowski is presently a supporter of the ruling Law and Justice (PiS) Party, having joined its group in the Sejm following the 2019 parliamentary elections in Poland.

This is outrageous — Poland appoints a high-ranking minister who actually might have Poland’s best interests in mind — a concept that is entirely alien to the Jewish mindset.

Jewry takes it for granted that every politician and bureaucrat will do their bidding — either through bribery, blackmail, or naked ambition — the three qualities that have made Joe Biden so successful and endearing to the American “voters”.

But in Poland it is still perfectly acceptable to publicly ridicule any politician who panders to Jewish interests — a phenomenon that would be suicide in the Judaized West.

The so-called JUST Act of 2017 is one of the many “solids” that Donald Trump extended to the Zionist mafia who propped him up — which basically authorizes the U.S. State Department to use whatever influence it has to put pressure on countries, especially Poland, to extort money on behalf of Jews who allegedly lost property during WWII.

No other people in Europe have been compensated one slim dime for their billions in lost property from that war, but the Jews, for some magical reason, are an exception — and they don’t even have to furnish documented proof of lost property to receive compensation — demanding proof would be antisemitic™.

And make no mistake — this isn’t just about compensation for the so-called Holocaust™ — Jews are actually demanding for property they lost under the Judeo-Communist regimes — regimes that they themselves ruled with an iron fist.

This kind of unconscionable audacity — or chutzpah — is foreign to most Christian sensibilities — but such Jews live by the adage, “The worst that can happen is they say no” — or “There’s no shame in asking.”

Jews — like their Black political untermensch — actually seem to enjoy this insatiable quest of easy money — while Blacks cheat the welfare system and knock off drug dealers, Jews rob entire nations with the stroke of a pen and a couple of phone calls — but the result is the same — only the magnitude is different: