Under Putin ‘Antisemitism’ At 30 Year Low, But Russian Jews Still Not Optimistic Or Satisfied 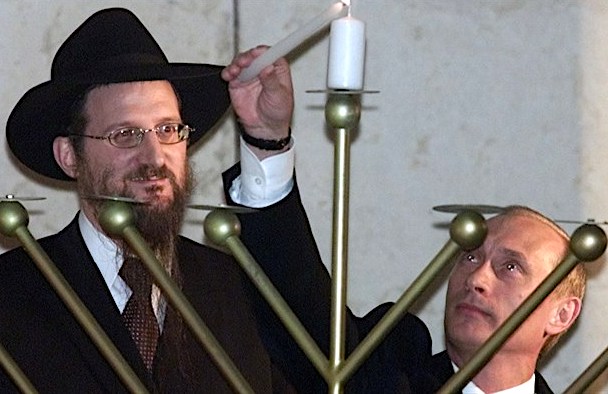 While today the Jewish community enjoys historic tolerance on the streets of Russia, its members are looking to the future without their perceived champion Vladimir Putin with trepidation, a new study shows:

“Many, if not all, believe that weak or no anti-Semitism as a Russian state policy in Russia is an exceptional or even ad hoc and temporary phenomenon that has not come to stay,” Alexey Levinson, head of socio-cultural research at the independent Levada Center in Russia, wrote in his study comparing Jewish life in Russia today with that of 30 years ago.

“Jews are not euphoric at all,” he wrote in “Jews in Contemporary Russia: Assimilation and Dissimilation,” which was issued in July and recently translated to English. The community’s fear is based on Russian history, with Jews in Russia having been subjected to the whim of whoever leads the country.

“Anti-Semitism goes hand in hand with the history of Jews for ages and ages, and they think these days are just a short interruption of this tradition,” says Levinson.

“The current decline in anti-Semitic state acts is because of the personal position of the current president of the Russian Federation, Vladimir Putin,” he says.

“They think that if he changes his mind or another, less tolerant person takes his place, the whole state apparatus and the public will return to the usual anti-Semitism.”

The climate has become so liberal that Jews have reached the upper echelons of Russian society and even taken on some aristocratic attributes, he says.

“It’s a peculiar age in Russian history. During the Russian Empire, Jews were a severely discriminated-against minority,” Levinson says.

“The Russian nobility was destroyed after the revolution and in the [1918-1920] civil war. But at the end of the day, [the Jews] … picked up some of the features of the Russian nobility. They are highly educated and maintain and further Russian culture.”

Jewish life in Russia is very different than it was three decades ago. There are fewer Jews in Russia because many have immigrated to Israel and elsewhere. Those who remain are more assimilated and can more easily blend into the general population.

“There is a continuum of people: On one end, there are those who practice Jewish rituals and habits. On the other end, there are people who don’t like to mention their Jewish origin,” Levinson says.

“Most of the Jewish population is somewhere in between: They know their Jewish origin, they know one or two things from Jewish culture, like celebrating Hanukkah and tasting matzah during Passover, but it’s not a serious part of their life,” he added.

Estimates of the number of Jews in Russia vary widely, from 200,000 to 1 million. Of this population, Orthodox Jews are a minority.

Natan Sharansky, the former chairman of the Jewish Agency and a political prisoner in the Soviet Union, says that Jews in Russia are much freer today than they were 30 years ago…

However, Jewish life in Russia today is not perfect.

“Maybe 10% [of them] do some type of Jewish activity,” he said. “To be an active part of the Jewish community is a challenge.”

Sharansky says that anti-Semitism is much more of a problem in other countries.

“For the last 15 years, rabbis in Paris have told young children in Jewish schools not to wear kippahs [skullcaps] in the street because it could be dangerous. In Moscow, you can walk freely down the street with a kippah,” he says.

Sharansky and Levinson disagree about the relationship between Jews’ improved situation in Russia and the Soviet Union’s collapse, with Levinson arguing that there is no connection.

“Emigration started before the fall of the Berlin Wall and was one of the causes of this historical event. The Soviet Jews were the first ethnic group to break free from the totalitarian state,” Levinson says.

Sharansky, who wrote The Case for Democracy, says he believes that a more democratic Russia has made life better for Jews and that the growth of democracy is necessary to protect Jews from any future government-backed anti-Semitism.

“If there are [governmental] changes and anti-Semitism returns to the level it was at for 1,000 years … today’s positive societal views of Jews won’t be enough to stop it. The democratic composition of the country has to be strong enough to fight these pressures.”

“One thing that can be said for sure is: Putin is not an anti-Semite,” Sharansky says. Putin “has a positive attitude towards Jews, which is very unusual in Russian history. At the same time, Putin is not great for Russian democracy, and so Jews and other citizens of Russia may be disappointed about restrictions on freedom.”

And the proof that Putin is good for Russian Jewry is that he has gotten re-elected over and over again without any serious objection from the Jewish oligarchs or powerful Chabad cabal.

But Jews get uneasy when there is no ‘antisemitism’ to kvetch about — no matter how trivial or farcical — after all, nothing makes a Jews feel more Jewish than a daily dose of “Jew hate“.

In fact, Jews have expressed fear that the disappearance of antisemitism — which they claim is their goal — could eventually lead to a total loss of Jewish identity.

And so, ironically, it becomes in the best interest of Jews to foment antisemitism every now and then to remind ‘assimilated’ Jews never to stray too far from the ‘protection’ of the inner circle.

Perhaps it is this characteristic of Jews to be eternally dissatisfied no matter how auspicious and comfortable their lives become  that is the secret to their so-called ‘success’ or power.

But in the role as the world’s antagonists — the false accusers — they expend their entire lives feverishly subverting and destroying western Christian civilization rather than truly building anything great in their wake.

Israel is the epitome of Jewish nation building prowess — and without tens of billions in annual aid from the U.S. taxpayer, along with perpetual ‘Holocaust’ reparation payments from Germany, and billions in private donations from U.S. and European Jewish ‘charities’, it would dry up and be cast away in the wind.

Israel is the greatest welfare state the world has ever known.

The Jewish Bolsheviks laid utter waste to Czarist Russia, murdering 60 million Christians in the process, and replaced it with nothing but death, poverty, disillusionment, and cynicism.

But communist Russia, under Jewish control, would have failed immediately had it not been secretly receiving aid from the West during its entire existence.

In the words of the Jewish writer Maurice Samuel in his book “You Gentiles“: ““We Jews, we are the destroyers and will remain the destroyers. Nothing you can do will meet our demands and needs. We will forever destroy because we want a world of our own.”