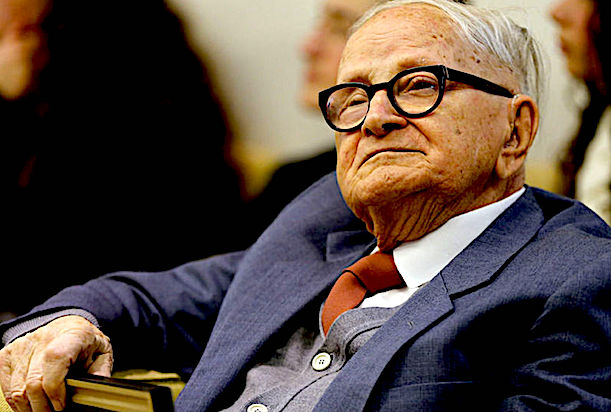 Shortly before his death in early 2019, Rafi Eitan, a former high-ranking intelligence officer with the Israeli Mossad who was the mastermind behind the notorious ‘Apollo Afair,’ gave a ringing pubic endorsement of the German ‘far right’ party, AfD, which many Jews have accused of being a magnet for ‘neo-Nazis’:

Dear Friends of AfD, Alternative for Deutchland. That means Germany, for me. Please accept our greetings from Israel, especially to your chairman, Mr. Dr. Gauland, Mrs. Dr. Weidel, and Mrs. Von Storch. I also want to greet my colleague, Mr. Kleiner and Rabbi Dr. Rozwatski. Please understand that all of us in Israel appreciate your attitude toward Judaism, and we read your publication on the 27th of January in the gathering ceremony of the International Memorial Day of the Holocaust.

I am sorry very much because of my sickness, because. of my flu, I am not able to come to you and attend the meeting here in the Bundestag. And I put few words of mine to Mr. Chaim Meuhlstein that will read it to you.

The Israelis have been actively involved in the flooding of Europe with the dregs of the Muslim and African worlds.  This flood benefited Israel in that it weakened and undermined the European economy, one of Israel’s greatest competitors.  And the flood also benefited the Jews in general because Europeans focused on the violent invaders instead of the Jews who sponsored the invasion.

Of course, with this invasion came Muslim antisemites who target Jews.  Now that the Jews have dropped this atomic population bomb on Europe, they will turn around and support the anti-immigration “extreme right” in Europe which will advocate protecting Jews from these “imported antisemites”, along with making stronger ties with the Israel, despite its unpopular ongoing genocide in Palestine.

The Jews know that a rise of right wing populism in Europe in reaction to their destructive immigration policies was inevitable, which is why prominent Jews like Eitan are backing it to make sure the movement remains 100% kosher and Jew-friendly, as we have previously reported.

And notice that Eitan claimed that this ‘right wing’ movement, as long as stays kosher, will be allowed to spread across all of Europe.  Don’t be fooled.  If the Israel Mossad is endorsing the ‘far right’ in Europe, you can rest assured that it is a ‘controlled opposition’ psy-op made in Tel Aviv.