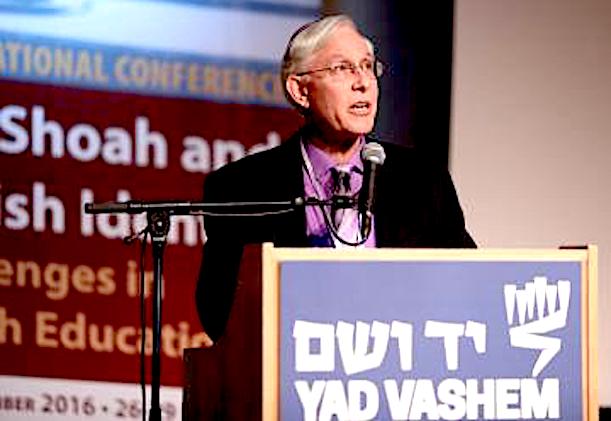 Here we have an interview with Ephraim Kaye, a director at Yad Vashem Holocaust Museum in Israel — using classic Orwellian double-think — in which he attempts to explain how the complete lack of physical evidence to support the official Holocaust narrative is actually proof that the Holocaust happened.

In essence, he’s admitting that Holocaust denial is completely rational — this complete lack of physical evidence requires a extraordinary leap of faith to believe it happened — and yet they have thrown many people in jail — and continue to do so — for not going along with Kaye’s implausible explanation as to why there is no evidence to support this event — which Kaye himself describes as “unbelievable“.

In Kaye’s own words:

Essentially, Holocaust denial is part and parcel of the history of the Holocaust itself — as the Nazis perpetrated against the Jews during World War II.

And what do I mean?  I’m going to give you a few examples.  The most glaring, blatant example is the largest death camp — Auschwitz-Birkenau — or Auschwitz II as the Germans called it — where — this is a death camp — that began its killing operations in March 1942 and to continue to murder people until November 1944 when the facility was closed down because the Russians were getting too close.

During that two and a half years, it’s anywhere between 1.2 and 1.4 million people were murdered — 90% were Jews — and the chilling fact is when you come back and you visit that facility today — having been there 18, 19 times with different groups — IDF officers — educators — and you walk around the camp, which geographically is a tremendous area — it had 60,000 permanent prisoners at any given time — and you walk around and you look for the physical evidence of the destruction of 1.2 to 1.4 million people — what’s distressing, and depressing is that you really don’t find it.

You don’t find the mountains of clothing of victims that arrived there.  You don’t find mountains of ashes and bones — it was taken in trucks and dumped in the Vistula (River) or the swamp around Auschwitz.  You don’t see the actual buildings of the crematoria or gas chambers — they were blown up by the Germans before they retreat in 1945.

And so you come to a death camp facility, and essentially you walk away to think something very sterile — you don’t actually see with your own eyes — hands, smell, touch — the actual destruction process.

If I go take you back to a place called Treblinka — one of the small death camps — where between the 22nd of July, 1942 and the 2nd of August 1943 — it’s estimated that 900,000 Jews were murdered in those 13 months at Treblinka.  And you go back and visit this death camp — unbelievable — there is nothing there — well, there is something there today.  In 1960, the Polish government created a very moving memorial of 17,000 stones that they dispersed in the entire area where the camp originally was.  And on the stones they engraved the names of Jewish communities that were sent to Treblinka and destroyed there.

But when you look for physical evidence, there’s nothing there — because before that camp was closed down — by the way because of a Jewish prisoner revolt on the 2nd of August, 1943 — but in the Spring of 1943, there were no crematoria at Treblinka — there were gas chambers — bodies were buried in tremendous deep graves that were dug by steam shovels — at Treblinka.  Himmler gave an order to dig everything up — destroy everything — and disperse it in the entire area — which was done — and Jewish prisoners had to do this work.  And so a person visits today Treblinka and sees nothing.  A person visits Belzec or Chelmno, or Sobibor and the same thing — hundreds and hundreds of thousands of Jews were murdered in those death camps, and you can’t see anything.

Beyond that, if I go back to places where shooting operations took place — not gassing operations — places like Babi Yar where we know there were 30,000 Jews were murdered there in the end of September, 1941 — all together close to 60.000 Jews in ’41 and ’42 were murdered in Babi Yar — and you go back there and you dig it up, you should find some physical evidence — bodies, bones, something — that doesn’t disappear — it’s not there because it was all dug up by a special, top secret operation commanded by SS Paul Blobel, called 1005 — personally created by Himmler in the Spring of 1942.

As we have previously reported, at the alleged height of the killing operation in 1943 — the Jewish press published a cover story explaining why there would be no physical evidence of any mass murders of Jews at the end of the war.

In other words, the Jews had already to committed to the “Holocaust” narrative so as to justify the establishment of Israel — but because they made it all up — with the help of Academy Award-winning screenwriter, Ben Hecht — there wasn’t going to be any physical evidence to support such a far-fetched scenario.

But they created a serious credibility problem — why would the uber-rational and efficient Germans at the height of their strength — believing that they would probably win the war and have nothing to hide — waste valuable man power and material support to hide the evidence of mass murder?

It makes no sense, and the Jews know it — but instead of admitting the obvious, they double down on this absurdity.

Both Auschwitz and Treblinka were built in swampy areas where the water table was very high — if you attempted to dig a mass grave, as Ephraim Kaye contends, it would immediately fill with water.

And if the Germans merely threw millions of tons of clothing into the Vistula River, that evidence could easily be dredged up today — but never has been because it isn’t there.

Just like they won’t dredge the Danube River for the alleged tens of thousands of shoes to confirm the mass murder of Jews in Hungary — because it never happened.

And there is no evidence of mass murder at Treblinka for a very simple reason — it was a transit camp, not a “death camp” with “gas chambers”.

According to these ridiculous Jewish “eye witnesses,” the Germans used a diesel-powered submarine engine from a Soviet submarine to gas the Jews at Treblinka — but they didn’t realize that diesel exhaust is not poisonous enough to kill people in “gas chambers” — or anywhere.

Watch the brilliant documentary “One-Third Of The Holocaust,” which completely dismantles and destroys any notion that Treblink, Belzec, and Sobibor were “death camps” with “gas chambers” — or that the Germans could have “cleaned up” the mess there.

There is no physical evidence of the Holocaust for a very simple, common sense reason — it didn’t happen.

And why is this important for Christians to understand?

The Jews are using this fake Holocaust narrative to replace the suffering of Christ on the cross with the suffering of the Jews at the hands of Christians in “death camps” — so that we “repent” of our Christian “antisemitism” and worship the anti-Christ Jews instead of Christ.

Watch the interview with Ephraim Kaye here on Bitchute.