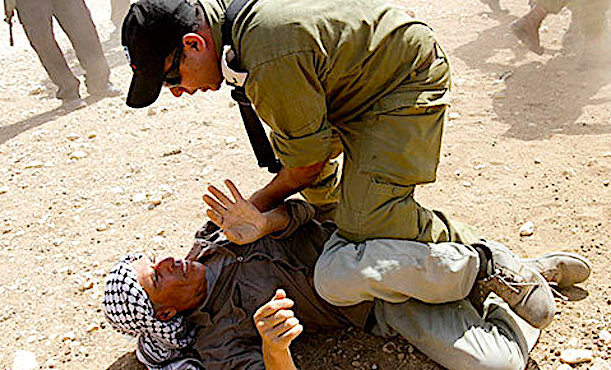 CJA spokesman Rabbi Aryeh Spero released a statement Sunday, lambasting Rep. Levin for his comments a week ago during an online seminar hosted by the anti-Israel group IfNotNow.

“Injustice anywhere is an injustice everywhere,” Levin said during the webinar. “Unless Palestinian human rights are respected, we cannot fight anti-Semitism.”

“In a breathtakingly absurd statement, Congressman Andy Levin (D-Mich) stated during a February 1 webinar that anti-Semitism cannot truly be defeated until ‘Palestinian human rights are respected.’

“Mr. Levin is blaming anti-Semitism on the Jews, the very victims of anti-Semitism. This is cruel. Anti-Semitism pre-dates the Israel-Arab conflict and will be with us, unfortunately, in future decades to come.”

“The world’s anti-Semitism is not a function of the lack of conclusion to the Israeli-Palestinian Arab situation. The Jews of Israel have made countless efforts towards peace and have implemented thousands of acts of humanitarianism towards the Arab and Muslim population, which is seldom requited back to them. Yet, anti-Semitism still exists. Jewish families and Israeli schools are constantly under bombardment by groups of Arab Palestinians whose hatred of Jews predated by centuries the establishment of a Jewish state. ”

Rabbi Spero continued: “Reading Mr. Levin’s other comments, it is obvious that his leftist ideology places blame on those parties continually demonized by today’s leftwing leaders. Israel is one of those targets. His statements show that he appears to see anti-Semitism as coming from the political right only. This willful blindness allows the widespread, dangerous anti-Semitism fomenting in today’s leftwing camp. It is obvious that Mr. Levin, as with many wayward Jews who sadly have lost their way, is focused much more on hurting the political right than actually stopping anti-Semitism.”

“Levin boasts of his friendship with Ilhan Omar and of his warm cooperation with ‘his sister’ Rashida Tlaib, both widely known for expressing disparaging and pejorative remarks not only about Israel but also about Jews who support Israel. This should be proof enough that Mr. Levin is not an honest broker when talking about anti-Semitism.

“That Levin blames anti-Semitism on Jews who do not surrender to Palestinian Arab leadership calling for Israel’s destruction is akin to blaming Jews for the dislike of them by the Third Reich.

Unfortunately, it seems that many people born Jewish, carrying a distinctive Jewish last name, are the last people in the world upon which the Jewish people and America should place their hope for eliminating anti-Semitism.”

Obviously, Congressman Levin didn’t get the memo that Jewish behavior has nothing to do with antisemitism — every other ethnic group can be criticized and be held responsible for their actions except Jews — they are sui generis — a people who have never victimized anyone — and have always been victimized by others — since the beginning of recorded history.

If one were to hold Jews responsible for their behavior, “another” Holocaust could potentially be set in motion — or at the very least another pogrom.

High level Freemasons in France seem to agree with Congressman Levin — that there is a noticeable “uptick” in antisemitism in Europe caused by brutal anti-Palestinian policies of the “extreme Right” in Israel.

Also, a survey in 2019 confirmed this trend — showing that Jews of Europe experienced increased antisemitism when the Israelis brutally slaughtered Palestinians — even when they claimed they were doing it in “self-defense”.

No doubt, Israel should be free to slaughter the Palestinians “in self-defense” without having to suffer the “cruelty” of antisemitism — after all, young Israelis overwhelmingly support the use of ‘torture’ against their perceived enemies.

People are being slaughtered all over the world, after all — why pick on just the Israelis for ethnic cleansing?

The Israeli military, in fact, assigned a secret unit to ensure that all evidence of ethnic cleansing of the Palestinians was “purged” from their archives — and if it is purged, then it never happened.

Guilt-free ethnic cleansing should be a universal human right — especially if it ensures that Jews continue to enjoy their cherished and well-deserved status as the World’s Ultimate Victims™.