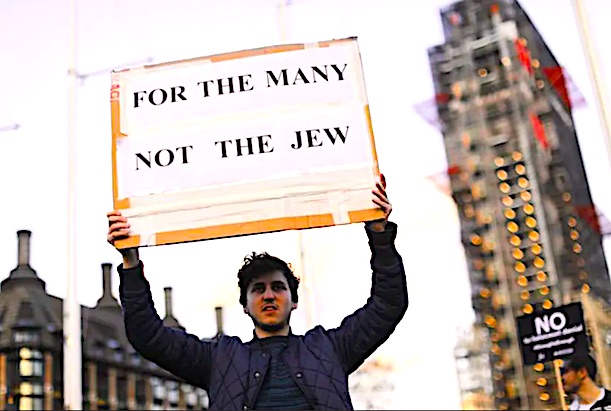 As we’ve previously reported, organized Jewry’s efforts to “educate” the public about “antisemitism” have largely failed because, they contend, the very term “antisemitic” is problematic and confusing, which has caused them to attempt “rebranding” antisemitism under different monikers such as “Jew hate” and, most recently “anti-Jewish racism”:

In the maelstrom and vitriol that followed the Equality and Human Rights Commission’s damning report into the Labour Party under Jeremy Corbyn last month, few noticed the near total omission in the response from the Jewish community of the very word the EHRC had just reported on: “Anti-Semitism.”

In a joint statement, the Board of Deputies and the Jewish Leadership Council said the report “disgraces those who attacked us for speaking out against anti-Jewish racism,” calling Jeremy Corbyn “a figurehead for old and new anti-Jewish attitudes.”

Commentators soon picked up the baton. In his searing column, Jonathan Freedland of the Guardian began with “antisemitism” but ended up asking “why anti-Jewish racism might take root.”

Yet the change was already underway. In September, the Union of Jewish Students slammed universities for “failing to sufficiently protect their Jewish students from anti-Jewish racism, the oldest form of racial hatred.”

Later that month, the Antisemitism Policy Trust — which may now need renaming — said Microsoft’s chatterbot had “learned from its social media interactions to post anti-Jewish racism.”

Two weeks ago, it even seemed to have filtered through to the BBC, its news site saying Labour had “failed to stamp out anti-Jewish racism when Jeremy Corbyn was leader.” Goodbye old Jew hatred; hello new rebranded one.

Some may see this as odd, given all the fights it took to get here. For a start, there was the heave-ho over the infamous dash — aka The Battle of the Hyphen — when “anti-Semitism” faced off against “antisemitism.”

Then there was the scrap over “what anti-Semitism is,” with criticism of the International Holocaust Remembrance Alliance (IHRA) working definition giving way to a slow acceptance across the UK.

Yet odd it is not, because the switch to “anti-Jewish racism” is neither natural evolution nor incidental lexicography, as evidenced in the Jewish Leadership Council (JLC)’s annual financial filings, published online last month…

Enlighteningly, it says: “One example is the shift from the term antisemitism — a word with absolutely no recognition in one focus group — to the more recognised notion of ‘anti-Jewish racism.’ We have made a concerted effort to use this language.”

Here it was, then: recognition that this is a purposeful change, because the word “anti-Semitism” had in some cases “absolutely no recognition” from the public. What it meant, in other words, often meant nothing….

“Using this understanding we successfully shifted the terminology used towards ‘anti-Jewish racism,’ in no way to downplay the uniqueness of anti-Semitism, but to ensure that no one misunderstood our grave concerns,” she says.

Others were engaged — and wholly onboard. “We suspected that the public basically didn’t know what the word ‘anti-Semitism’ means,” says Mark Gardner, chief executive of the Community Security Trust, the charity charged with defending British Jews from anti-Semitism. “But the research showed that it was a deeper problem than we had realized.”

To some, this is less revelatory. Danny Stone, chief executive of the Antisemitism Policy Trust, cites a 2014 UCL poll in which 68 percent of almost 8,000 respondents were unfamiliar with the term anti-Semitism, and/or unaware of its meaning…

He recalls moves at the UN to widen the meaning of “anti-Semitism” to include all Semitic peoples, but Semitism “legitimizes a form of pseudo-scientific racial classification thoroughly discredited by association with Nazi ideology,” showing how the word “anti-Semitism” can be “mis-used and played upon.”

The Board of Deputies’ public affairs director Phil Rosenberg goes further, describing how the changed communal tack is as much a response to those with political agendas as to those with none….

“[Some] on the far-left tried to claim that ‘real’ racism was worse than anti-Semitism. They also insinuated that we were claiming anti-Semitism to be more important than other forms of racism.

“By using the term ‘anti-Jewish racism’ we remove their ability to do that by being clear that anti-Semitism is a form of racism and is not in competition with any other form of prejudice,” he says…

The last word, appropriately for a discussion on anti-Semitism, goes to Gardner. “Anti-Jewish racism is not a perfect form of words,” he says. “Ideally it would be said in conjunction with the word ‘anti-Semitism’ to make the meaning clearer. But it makes the point.”

There is no consensus on the meaning of “antisemitism” because it is a bogus and meaningless concept from top to bottom — based on the preposterous notion that of all people in the world, only Jews are uniquely and irrationally hated for no reason whatsoever.

Jews are demonstrably not Semites — the claim that they are is based on Jewish fables that they are racial Israelites, which is easily dismissed on both Biblical and historical evidence.

The Jewish professor Shlomo Sand thoroughly discredited the Israelite identity of Jews in his groundbreaking book, The Invention Of The Jewish People, which you can read in the CTF Library.

Which then leaves us with the question — Are Jews a distinct race?  If Jews are not a distinct race, then hatred or opposition to them cannot be a form of “racism”.

Clearly, within Jewry there is an obvious “racial” caste system based on skin color — with the “whitest” Ashkenazi at the top and the Black African “Jews” on the bottom — with a mixed multitude in the middle.

All Jews are race mixed — and racially are no different from Arabs, Indians and Mestizos.

Perhaps, Jewry should seriously reconsider going with the much more honest and straightforward “Jew hate” — but even that is problematic because it begs the question, “Why are Jews uniquely hated in the first place?”

But to even suggest there is a reason for Jew hatred is by definition antisemitic.