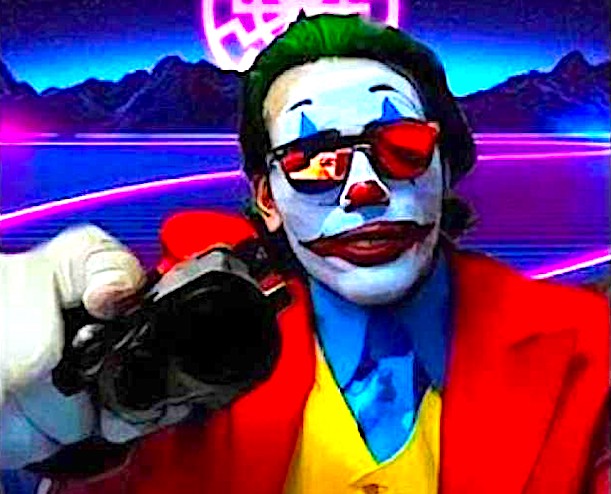 (CBS Miami) The Anti-Defamation League has fingered an online ‘white supremacist’ they’d been monitoring — and tipped off the FBI Joint Terrorism Task Force — precipitating his arrest in a massive, multi-agent raid on his residence for allegedly possessing a gun in violation of his previous parole terms:

Paul Miller, 32, was arrested Tuesday after the FBI’s joint terrorism task force raided the Riverside home he had been renting for a month after Miller moved there from New Jersey.

Miller is charged with possessing a firearm by a felon and witnesses say they saw agents remove guns from the house.

Miller has an internet presence and often appears in costume ranting racist remarks.

After his arrest, the Anti-Defamation League put out this tweet:

CBS 4 spoke to Carla Hill with the ADL’s center on extremism on Wednesday.

“The concerning thing is he seems to get more extreme to keep his followers interested. He has several red flags. His violent rhetoric. He has weapons, he expressed the need for a race war,” she says.

At the end of his hearing, Miller expressed regret saying, “I’m really sorry about all of this. I really am.”

Like the recent case of Travis Patron in Canada, Jewish supremacist groups are exercising their power behind the scenes to get law enforcement to arrest people they don’t like on trumped up “hate speech” charges using whatever legal technicalities they can find.

And this is not a “conspiracy theory” — the ADL has openly bragged that they have “working relationships” with the FBI and Department of Homeland Security — and when the ADL talks, the FBI listens.

Let’s face it — if the FBI wanted to, they could arrest tens of thousands of violent Black felons on parole violations — especially for  weapon possessions — every day of the week, all year long, but they don’t.

Paul Miller has no apparent history of violent criminality — he was apparently arrested 13 years ago when he was around 18 years old on some sort of drug charges — and part of his parole agreement was that he not possess any guns, which is standard for felony charges.

Apparently, he violated the terms of his parole and was charged with possessing a gun in 2018 in New Jersey — according to the recent indictment.

And yet despite violating his terms of parole, his parole officer allegedly allowed him to leave New Jersey and recently move to Florida — which is very strange considering the “seriousness” of that violation.

But Miller has been on the FBI’s radar for years — for his activism protesting the lockdown — but more significantly, for protesting the apparent murder of Duncan Lemp during an illegal police raid.

But here’s where it gets even more strange — part of Paul Miller’s online act as the “Gypsy Crusader” — where he dresses up as the Joker, the Riddler, or one of the Mario Brothers — and trolls people with “racist” comments on the Omegle chat server — is that he often brandishes what appears to be a handgun at people as he trolls them.

Even if that handgun that he uses in his act is fake — which it most assuredly is — it is certainly a stupid thing to do because if the FBI saw him with that gun, they could very easily be justified in getting a search warrant to investigate if it is indeed real.

And given how he openly uses the most raw and extreme language in his act — he must have known that he would get the attention of Jewish groups like the ADL who would look for any excuse to shut him down and get him arrested.

He has posted his troll videos on Bitchute — under his own GypsyCrusader channel — and he has a Telegram feed.

Paul Miller’s act is all about shocking people with “forbidden” naughty words — like nigger, kike, dyke, etc. — and in many ways he’s not unlike the Jewish “comedian” Lenny Bruce, who was famous for calling Blacks in his audience “nigger” at his live stand-up shows.

In fact, when Lenny Bruce says “nigger”, it’s not a violation of YouTube’s terms of service — but that’s because Jews openly admit hypocrisy and double standards are part of their way of live.

But, of course, the crucial difference is that Lenny Bruce had Jewish privilege — when he called Blacks “nigger”, it was for the “right” reasons — but Paul Miller isn’t allowed to say it, even though he’s made it abundantly clear he was doing it as “comedy entertainment” to destroy the social power that the word has, just like Lenny Bruce.

Despite the ADL’s attempt to portray Paul Miller as “inciting violence”, there is no proof whatsoever that anyone has been harmed by his online act — even indirectly — and a recent suppressed Federal government report admits that online “hate speech” like Miller’s does NOT cause violent “hate crimes” in the real world.

In reality, the Jewish supremacists wanted Paul Miller silenced because he openly challenges their Jewish supremacy and hypocrisy — and to the ADL, when you challenge their power, you are a “terrorist”.