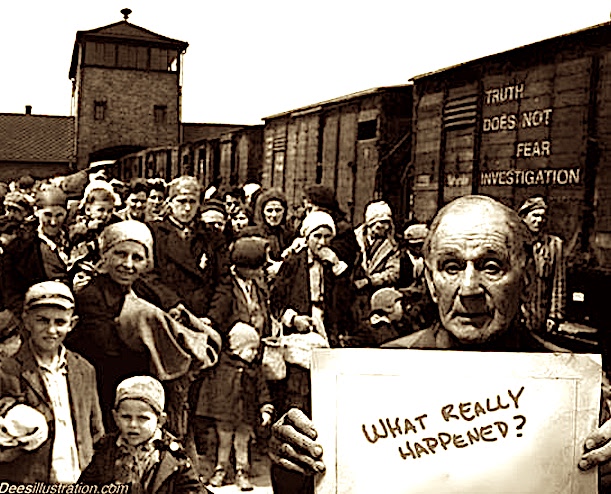 At the behest of powerful Jewish interests, this week Google Play banned the third-party app BitChute — a “free speech” alternative to heavily censored YouTube — because it has become a safe haven for people and groups who openly oppose Jewish supremacy and draconian Soviet-style censorship:

[The Tel Aviv-based] Google suspended the app, stating that it is in violation of its affiliate spam policy, although BitChute denies this claim, tweeting a photo of Google’s notification.

The UK-based video platform was set up in January 2017 by tech entrepreneur Ray Vahey and Richard Anthony Jones. It has become a platform used by alt-right groups, with UK-based Community Security Trust (CST) finding it to be one of the four most dangerous outlets of extreme anti-Semitic content on the Internet.

According to pro-Israel lawyers and activists, in the context of rising antisemitism, public access to this platform and the site’s active promotion of antisemitism are cause for major alarm. Recently, social media companies are being pressured to clean their platforms of hate speech and adopt the IHRA definition of antisemitism, but this has led antisemites and white supremacists to look for other places to share their content.

Despite the site’s community guidelines that say “incitement to violence” and “malicious use of the platform” will not be tolerated, on the site are pro-ISIS content, calls for the killing of Jews, Holocaust denial, classic antisemitic characterizations of Israel and Israelis, and drawing comparisons to a contemporary Israeli policy to that of the Nazis—each with tens of thousands of views…

Director of UK Lawyers for Israel, Caroline Turner, maintained that online antisemitism promotes and incites hatred of Jewish people, and even violence against Jews. “It twists the truth, contains blatant lies and promotes conspiracy theories suggesting that Jews are the cause of various evils in the world,” she told JNS.

“There is no specific law against antisemitism in the United Kingdom, although there are more general laws about sending grossly offensive and menacing messages, and stirring up racial hatred. If the person who uploaded the offensive material was based in England or Wales, and traceable, then it is possible to report their behavior to the police,” she explained, adding that there has been a precedence of prosecuted individuals who have sent antisemitic messages over social media, though they have been few and far between.

Turner related that fighting antisemitic material online is especially challenging due to the prevalence “difficulties in finding out who is responsible for the post.” Another challenge, she added, is “if the service provider and those posting the material are in a jurisdiction where the right to free speech is considered absolute.”

UK Lawyers for Israel has contacted Bitchute’s Internet service providers, including “Epik, Cloudflare, Taboola, AS53667 Frantech Solutions, Google Ads, Microsoft Azure, Choopa, Subscribestar and Regus, to request that they terminate their relationship with BitChute. So far, said Turner, only Choopa has responded that “they had checked with the Content Delivery Network (CDN) provider, Cloudflare, who indicated that the back-end hosting provider is not Choopa, instead it appears to be AS53667.”

“It is truly shocking that there is so much antisemitic material online and on social media, and really that there have been so few convictions. History has shown that this is a dangerous trend, and it really must be stopped. If offenses are being committed, we call on the police to prosecute them, and hopefully, this will deter other from this behavior,” she said.

Gideon Falter, chief executive of British NGO Campaign Against Antisemitism (CAA), explained that “over the past several years, we have seen an exponential growth in antisemitic abuse on social media platforms, including mockery and denial of the Holocaust, anti-Jewish incitement and endless antisemitic tropes from the far-right and the far-left.”

“…The popularity of antisemitic tropes and conspiracy theories are a wake-up call,” said Falter. “Social media companies have a responsibility to clamp down on such gratuitous and dangerous racism on their platforms, and we will continue to press them to act.”

Hypocritically, Jews claim that pornography should be protected free speech — despite the fact that many legitimate studies have shown a direct correlation between exposure to pornography and extreme violence, including many serial killers.

If Jews were really concerned about “inciting violence,” they would use their inordinate power to censor pornography, not legitimate historical revisionist materials — but since Jews dominate the pornography industry and make billions off of it, it’s not likely hypocritical Jews will call for any censorship of that “popular” content.

No one has ever made such claims about Holocaust “denial” videos — that they incite deviants to become serial killers.

In fact, the opposite seems to be true — censorship of Holocaust “denial” materials may incite people to violence because it’s a cynical “trick” that represses the truth.

And censorship of all skepticism of the official Holocaust narrative appears to encourage Jews to lie about it even more — and that’s certainly not good for Jews who often get caught in monstrous lies about their alleged experiences during WWII.

Despite their dire predictions, there is no direct correlation between “antisemitic” materials and violence — tens of millions of people have already read Holocaust “denial” and Jewish supremacist materials, and virtually none of those people went out and committed violence against Jews because of it.

Jews claim that if not censored,  “antisemitic” Holocaust denial material could lead to “another” Holocaust — but perversely, what they don’t want you to know is that there wasn’t a real Holocaust to begin with.