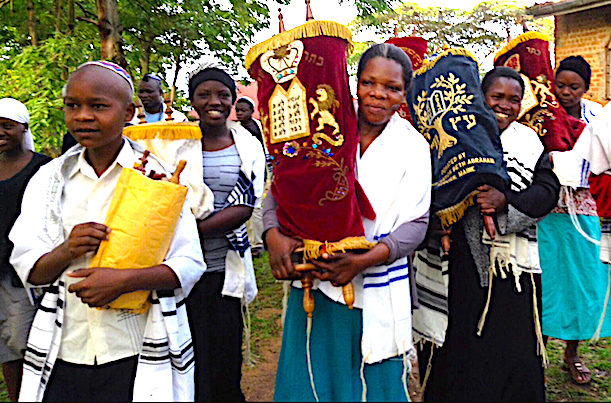 American Jews with ties to a small community of Jews in Uganda have condemned the Israeli Interior Ministry’s “racist” decision to reject the right of those Jews to immigrate to Israel — simply based on the color of their skin:

The ministry was responding to a Supreme Court petition by Kibita Yosef, a Ugandan Jew who had requested to make aliyah.

Yosef, who converted to Judaism in 2008 under the auspices of the Conservative movement, first applied to immigrate to Israel while studying in a yeshiva there under the Law of Return. The law allows all Jews, including those who have converted, to become citizens.

But the Interior Ministry, which handles citizenship, rejected Yosef’s application, according to Haaretz. Yosef has appealed to the Supreme Court, which is expected to make its decision next week and could overrule the ministry.

The conflict could have potential consequences for Jews worldwide.

“We’re profoundly disappointed by the Interior Ministry’s decision,” said Rabbi Jacob Blumenthal, CEO of the United Synagogue of Conservative Judaism and the Rabbinical Assembly, which has a longstanding relationship with the Abayudaya Jewish community in Uganda. “We see it as a profound insult to the Conservative movement.”

The Abayudaya began practicing Judaism in 1919 after a Ugandan leader, Semei Kakungulu, declared himself a Jew and began adopting Jewish practices. In 2002, the Conservative movement began overseeing official conversions in the community.

The Ugandan community is affiliated with the Masorti Olami, the international organization representing Conservative communities worldwide, and is home to a chapter of Marom, a Conservative movement youth group. Gershom Sizomu later became the first Ugandan rabbi after his ordination at the Ziegler School of Rabbinic Studies, the Conservative movement’s seminary in Los Angeles. A woman from the community, Shoshanna Nambi, is now a rabbinical student at the Reform movement’s Hebrew Union College-Jewish Institute of Religion.

Blumenthal said he had visited the community in Uganda and seen “the vibrancy of their Jewish life” and “a deep love of Israel and the Jewish people.” The Jewish Agency, the paragovernmental organization in Israel that facilitates and encourages immigration to Israel, has recognized the Jewishness of Ugandan Jews.

But the Interior Ministry, which has the final say over matters of citizenship and is run by Aryeh Deri, head of the haredi Orthodox Shas party, has taken a different approach.

In a court document this summer, the ministry established a new policy on “emerging” Jewish communities like the Abayudaya, Haaretz reported. According to the policy, these communities would not be eligible to immigrate under the Law of Return, which says that those who convert to Judaism in a “recognized” Jewish community are eligible to immigrate…

“Part of this is a battle for who gets to define Judaism,” said Rabbi Bradley Artson, dean of the Ziegler School of Rabbinic Studies.

While the Yosef decision may not immediately impact the potential immigration status of non-Orthodox converts in established Jewish communities, the rejection of the Ugandan community’s conversions could cast doubt on other conversions performed by those same Conservative rabbis.

“I’m very proud that the Conservative Movement, to which I belong, has forged a strong relationship w/this community, including ordaining a rabbi & fighting for community’s rights in Israel,” she wrote in a tweet. “This is pure racism on the part of the state. The High Court must do the right thing.”

Asked whether the decision had to do with race, Artson said he wasn’t sure what the “inner motivations” were of the ministry.

“But it certainly has the appearance of racism,” he said.

Blumenthal said the decision to reject Yosef’s claim would only further divide American Jews from Israel.

“It’s one more example of a wedge that the Israeli government is driving between some in Israel and the Jewish people outside Israel,” he said.

Of course Israel doesn’t represent all “Jews” worldwide — that’s just a public relations stunt for the unwashed masses among both Jews and “Gentiles” alike.

Israel was founded as a Jewish ethno-State by and for Ashkenazi Jews from eastern Europe — largely from Communist Russia.

Ironically, every single one of these Ashkenazi Jews are descendants of Khazar-Hittites who converted to Judaism — just like these Ugandans — about 1,100 years ago.

But if you are not an Ashkenazi Jew in Israel, you are a second-class citizen — and that includes Sephardic Jews who actually have a longer — and more “legitimate” — connection to babylonian Talmudic Judaism.

Jewry does indeed have a racial caste system like India — with the whitest on top — and their ability to “pass” as White is the secret of their success in accessing the highest levels of power in White nations.

Of course, it would be “antisemitic” to accuse Israelis of practicing “white nationalism” — at worst, they could be accused of “white-appearing” nationalism — which doesn’t sound nearly as sinister.

After all, Israelis have seen what allowing Third World Blacks and Arabs have done to Europe, America, and all White nations — they know very well because they’ve aided and abetted it — and they don’t want that same “vibrancy” for Israel — and who can blame them?

When they were compelled — under pressure from human rights groups — to accept Ethiopian Jews, Israel did what any self-respecting ethno-State that wished to survive would do — they sterilized the women under the guise of a vaccine program.

So what we have here is one group of Jewish converts — the Ashkenazim — telling another group of later converts — the Ugandans — that they don’t have stars on their bellies — so they can’t be part of the club and enjoy all the benefits of membership.

And none of this would be an issue if today’s Jews were actually the real Israelites as they claim to be — the real Israelites of the Bible trace their ancestry through the father — whereas today’s Jews do the opposite — and trace their Jewishness through the mother — that alone should raise some red flags for anyone who believes that these “Jews” are really “God’s chosen people.”

Ironically, Jews and Africans share this custom of tracing legitimacy through the mother — Africans do it because no one knows for sure who the father is — so an African man is more likely to be closer to his sister’s children than “his own”.

According to his book The Genetics Of The Jews (Oxford, 1978) Arthur Mourant — a Jewish expert in blood typing — all Jews — whether Ashkenazi or Sephardic — have Black African admixture of somewhere between 5% and 10%.

Of course, the Israelis don’t want this fact advertised too widely — as it would open the flood-gates to their African brethren.

Perhaps the Zionist founding fathers of “Israel” should have called their new home in Palestine a more honest name — such as Ashkenazia — and just dropped the whole pretense that they have any legitimate connection to the Israelites.