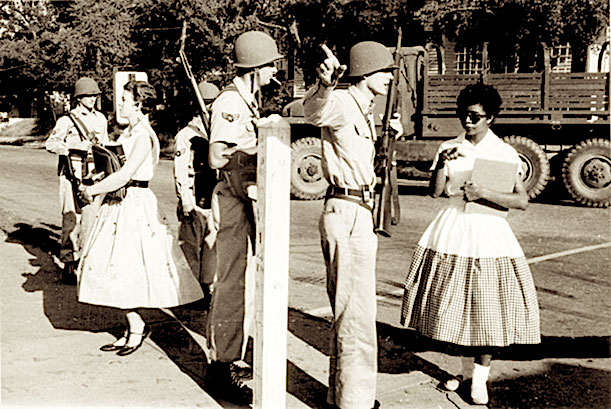 President Eisenhower’s appointment of Solicitor General Simon E. Sobeloff as Judge of the U.S. Fourth Circuit Court of Appeals was finally confirmed by the Senate last night after eight hours of debate, with a vote of 64 to 19, overriding Southern opposition:

The issue beneath the Southern opposition appeared to be Mr. Sobeloff’s presentation before the Supreme Court of the Administration’s plan for carrying out the court’s school desegregation decision. The response of his supporters was that he argued before the court eleven months after the decision and wasn’t even Solicitor General when the court made its original ruling in 1954.

On the roll call 35 Republicans and 29 Democrats voted for confirmation and 15 Democrats and 4 Republicans against. President Eisenhower first submitted the Sobeloff nomination July 14, 1955, but it was still bottled up in committee when Congress adjourned the following month. The President renominated Sobeloff January 12 and the Senate Judiciary Committee finally approved on June 29. The Fourth Circuit Court of Appeals covers Virginia, North and South Carolina, Maryland and West Virginia. Mr. Sobeloff, a Baltimore resident, is a former Chief Judge of Maryland State Court of Appeals.

Long active in Jewish affairs, Mr. Sobeloff is a former national vice president of the American Jewish Congress. He also served as president of B’nai B’rith in Baltimore, as well as president of the Board of Jewish Education there. He has been a member of the board of directors of the Associated Jewish Charities in his home city since 1925.

Senator Everett Dirksen, Illinois Republican, hailed Mr. Sobeloff’s confirmation and predicted he would “grace the bench with distinction and will be one of the greatest judicial minds of our time.”

The fact that Sobeloff was a member of B’nai B’rith — a powerful international Jewish secret society — should have been prima facie evidence that he was unfit to sit on the court — but that’s exactly why he was chosen.

And Brown v. The Board of Education was the first major Jewish salvo in their overt war against post-war White America — forcing racial desegregation upon America at the end of the barrel of a gun.

Of course, desegregation has been an unmitigated disaster for both Whites and Blacks — Black neighborhoods and communities went from relatively stable and self-sustaining to crime- and drug-ridden urban blight and welfare dependency within one generation.

Desegregation and “civil rights” implanted the Jewish narcotic of impossible “equality” in the minds of Blacks — and with it came resentment, anger, and the paranoia that their failure to live up to White standards was all the fault of “racist” Whites who “want to keep the Black man down.”

Like Jews live under the specter of another “Holocaust” lurking around every corner — they’ve convinced Blacks that if racist Whites had their druthers, they’d be lynching Blacks from every tree in America.

And the Jewish bolsheviks knew that Blacks could never compete with Whites in the same society on a level playing field — a meritocracy — so they instituted insulting and condescending mandatory affirmative action admissions and racial hiring quotas to artificially raise Blacks into the middle class.

By doing so they created an artificial Black middle class in America that today is largely dependent of government employment — at the Federal, State, and local levels — with a virtually non-existent Black entrepreneur class.

Probably 99% of the Black millionaires in America were created by the Jewish “sports-entertainment industrial complex” — another form of welfare that ensures that the wealthiest Blacks stay under the Jewish thumb.

And while White and Blacks fight it out in the streets — and our cities burn — the Jews rub their hands in their gated communities and blame this mayhem on “White supremacists” — the greatest “lethal” threat to America today, according to the Jewish head of the Department of Homeland Security.

And perhaps that is true, if you understand that it is a threat to the ongoing judaization of America –which uses racial tension as a weapon of mass destruction.